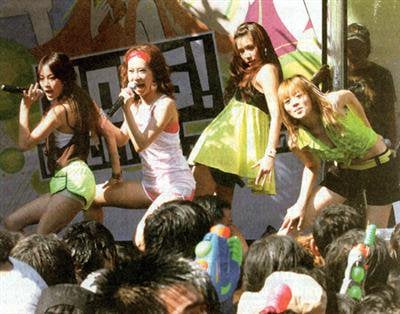 PHUKET CITY: With Christmas 2009 now in the past, Phuket is gearing up for the arrival of 2010 with a three-day ‘Colorful Phuket Countdown 2010’ festival to take place at the main stage at Saphin Hin from December 29 to 31…and well into the opening hours of 2010.

The event is being jointly organized by the Phuket Provincial Administration Organization (PPAO) and Phuket City Municipality, with event planning by Best4Media Company Ltd.

Acts scheduled for the night of Wednesday, December 30, will include a Thai classical dance performance by students of the acclaimed Bundit Pattana Silpa Institute of Silpakorn University and a much-anticipated ‘mini-concert’ by sexy pop quartet Girly Berry.

New Year’s Eve will feature an appearance by high-level TAT officials and local government officers, and concert performances by Akera, Kanomjin and headline act Four-Mod. There will also be a fireworks display.

The beer sponsor is Boonrawd Brewery, which means that jugs of creamy Singha draft should be available throughout.