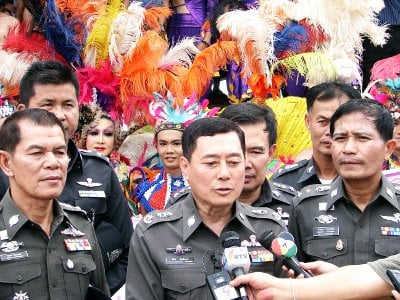 PHUKET: Phuket’s top cop yesterday held a rally in Patong urging the 1,000 or so people in attendance to vote in the July 3 election, and to avoid vote buying and selling.

“I have heard a lot of talk about vote buying and selling in Phuket – it can become quite competitive,” Phuket Provincial Police Commander Pekad Tantipong said during his address to the crowd.

“The Royal Thai Police headquarters has ordered us to take action against this sort of activity and we are campaigning to inform people that they must respect their voting rights,” Maj Gen Pekad warned from the stage.

“Not only will vote buyers be arrested as happened in the past, but sellers as well,” he added.

The crowd paraded from Soi Bangla on to Thaweewong Road carrying banners with anti-vote-buying slogans and ended at Patong Sports field.

The next such rally will be held at the Heroines’ Monument on June 16, Maj Gen Pekad said.