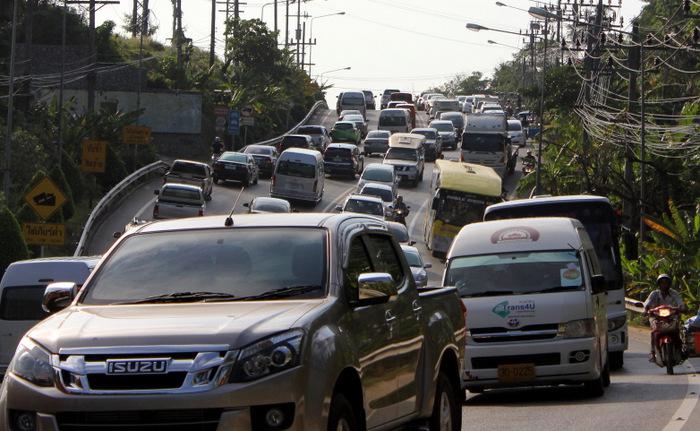 PHUKET: Officials in charge of the Patong tunnel project are reviewing strategies they can use to avoid creating bottleneck traffic jams at the Thung Thong Intersection in Kathu.

The tunnel project, budgeted to cost 9.57 billion baht – 6.80bn for materials, 2.56bn for land expropriation and 200mn baht for salaries – aims to provide a safe alternative to the notoriously dangerous road currently used to get into Patong (story here).

Present at a meeting at Kathu Municipality on Tuesday to review the problem was Lertsak Chingharanon, Deputy Governor for Technical Affairs at the Expressway Authority of Thailand (EXAT), the state enterprise tasked with completing the feasibility study for the tunnel.

“The intersection is the focal point of much of the traffic in the area. The tunnel could create bad traffic jams at that junction,” Mr Lertsak noted.

He explained that, so far, EXAT officials had come up with three strategies to cope with traffic at the junction: 1) Do nothing; 2) build a flyover across the intersection; and 3) expand traffic lanes at the junction.

“We will raise these options with other senior provincial officials and the relevant government officers on the island to see what positive ideas they may have,” Mr Lertsak said.

“Hopefully, together, we can come up with a solution.”

Mr Lertsak noted that reviewing potential problems before the project begins is critical to its success.

“Our feasibility study must be comprehensive to make sure we are aware of any problems the tunnel might create after it has been completed,” he said.

“It is always much better to prevent a problem than to let it happen and try to fix it later,” he said.