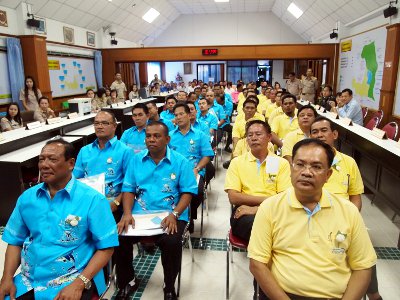 PHUKET: It was a busy morning at the Patong Municipality Offices yesterday, when two rival teams of Phuket politicians registered their candidacies for the upcoming municipal election scheduled for September 2.

Candidates have from August 6 through August 10 to register their candidacies in the election, which will see 18 council members elected in the town’s three electoral districts, which comprise six seats each.

Apart from the members of the two teams, independent candidate Manote Thonghom also registered his candidacy for a seat in District 1.

In accordance with Election Commission rules, all candidates who arrive before opening time on the first day of registration are entitled to draw lots to see who would be assigned the “lucky Number 1” slot on the ballot sheet .

In the mayoral draw, Mr Pian drew number “1” while his rival Mr Kittisan, who served on the town council back in 2003, drew number “2”.

In the draw for general council seats in District 1, independent candidate Mr Manote drew the lucky number “1”. Thus candidates on the Love Patong roster will run as numbers 2 to 7, while Patong Progress candidates will run as candidates 8 to 13.

In District 2 and District 3, Love Patong candidates were assigned numbers 1 through 6, while Patong Progress hopefuls will run as 7 through 12.

As previously reported, the poll will be a sobering experience for many in the seaside resort town, where alcohol sales will be restricted on four nights over a nine-day period due to the municipal elections and the provincial council polling that precedes it by one week.