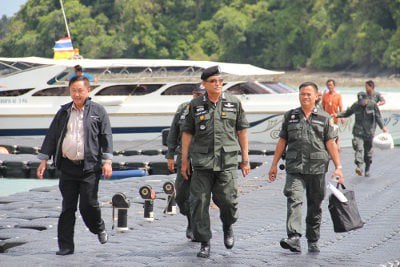 PHUKET: The investigation of a suspected casino under construction on Rang Noi Island, just off the coast of Phuket Town, was carried out last Tuesday without prejudice and was not intended to defame or spite anyone, the top officer leading the raid has told the Phuket Gazette.

Armed with a search warrant issued by the Phuket Provincial Court, more than 50 officers raided the site on the small island, located about six kilometers directly offshore from the Boat Lagoon and only 2.5km from Koh Maphrao.

Leading the sortie was Pol Maj Gen Norrasak Hemnithi, Commander of the Natural Resources and Environmental Crime Suppression Division (NREC) in Bangkok, joined by NREC Superintendent Col Watcharin Phusit and Witoon Chalayonnavee, an expert in aerial map photography from the Courts of Justice.

Gen Norrasak explained that he became aware of the resort only after he received a complaint that public land on the island may have been encroached on by the developers of the resort, and that the Chanote land title deed for the resort site may have been illegally issued.

However, he stressed that the raid was carried out in the name of justice. “The investigation conducted was done purely for the purposes of justice. We are not doing this to defame or to spite anyone. We investigated the whole area with the lawyer and representative of the company who did the construction on this piece of land,” he said.

“So far all we have found is that they have built on land beyond the area we know they own. We have not accused them of anything just yet, we just asked them to provide all of the documents to prove their ownership of the land [they have built on] within seven days,” Maj Gen Norrasak added.

NREC Superintendent Col Watcharin told the Gazette that his investigators found several aspects of the Chanote title for the resort plot, issued in 1997, suspicious. “The company [Kan Krao Company] claims they have a SorKor 1 [which confers the right to occupy land] issued in 1954, but when Rang Noi Island was added to the Land Office register in 1969, no one claimed ownership of that land,” he said.

“We will also have to check the SorKor 1 document since itsaid the land was in Moo 3 [Village 3] of Koh Kaew, which was correct at that time. But the administrative boundaries within Koh Kaew have since changed, and the island is now in what is called Moo 6 [Village 6] of Koh Kaew,” he explained.

He added that a discrepancy between the plot size marked on the Chanote and aerial photographs of the island prompted the NREC to apply for the search warrant that permitted the raid on Tuesday to take place.

“We will compare aerial photographs from the past with images taken in recent years. If we find that this document [the Chanote] was illegally issued, we will press charges against both the person who issued the document and the company that claims ownership of this land,” Col Watcharin warned.

It was during the investigation of the land ownership history that NREC officers found that an American, who they named as John Kevin Baldwin, was involved.

“We found that the land previously belonged to Bridge Rang Noi Company, which has two foreigners [as executives], including Mr Baldwin, and one Thai as the managing director.

“Mr Baldwin is involved in Kan Krao Co, which is developing the resort. Mr Baldwin is also allegedly involved in the Savan Vegas Casino in Savannakhet, Laos, where gambling is legal,” he explained.

“After inspecting the site, we saw that the construction looks like a casino, so Gen Norrasak believes that the resort might be used as one,” he explained.

Among the partly finished buildings and sea-view swimming pool at the site, officers found a custom-built, walk-in safe.