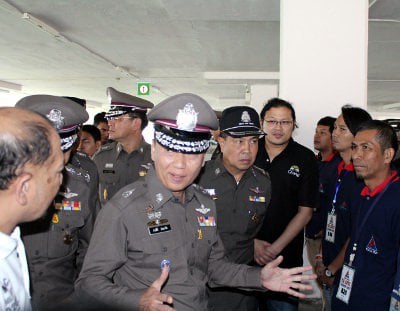 PHUKET: Patong has been nominated a “Safety Zone” by Deputy Police Chief Pansiri Prapawat as part of the “Phuket model” for public safety.

Speaking at a meeting yesterday that focused on establishing tourism safety measures for the island, Gen Pansiri said, “Phuket is one of the most attractive vacation places in Thailand. However, illegal taxis, jet-ski operators and issues with public safety are all concerns.”

Gen Pansiri explained that the central government planned to earn 2 trillion baht from tourism between 2011 and 2015, with one third of that expected to come from Phuket.

“There are four steps to the plan, which is designed to identify dangerous areas and secure them. The plan will also tackle the issue of illegal taxi drivers, jet-ski operators and others who are assaulting tourists,” he said.

The general made it clear that the use of CCTV and information-technology systems would be a necessary part of the plan in order to identify risk areas.

“The last step of the plan – once we’ve identified dangerous areas, implemented the necessary technology and coordinated our efforts – is to strictly enforce the law in accordance with the wishes of Deputy Prime Minister Chalerm Yubamrung, ” said Gen Pansiri.

“The risk areas must be identified and plans established to resolve the issues within 30 days,” he said.

Later yesterday afternoon, Gen Pansiri inspected Patong and concluded that the private operators were more than willing to cooperate with the police in establishing Patong as a ‘Safety Zone’.

“However, the true indicator of whether or not Patong has become a ‘Safety Zone’ will be a statistical reduction in crimes and an increase in the satisfaction of tourists,” Gen Pansiri said.

“I know that the problems with illegal taxis and jet-ski operators cannot be solved over night. But I do believe that we will have the results we want within three months,” he added.