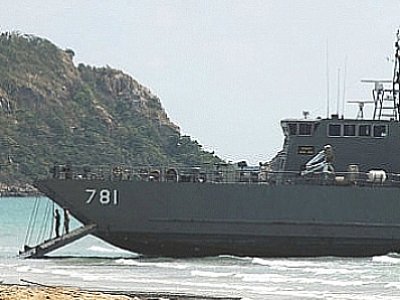 The announcement came at a press conference by the Navy Third Area Command at their base at Cape Panwa yesterday. The meeting was attended by Phuket Governor Tri Augkaradacha, along with representatives from the Marine Police, local government bodies, medical staff and rescue organizations.

“Taking part in the drill will be police, public health officials and hospital staff. Local administrative bodies will also play a part, including those from other Andaman coast provinces in our area of responsibility.”

Three exercises planned for Tuesday, July 10, will run from 9am to midday.

The first will practice casualty evacuation by naval helicopter, with mock casualties airlifted from Racha Yai island to Cape Panwa.

The second exercise is based on the frightening scenario that a cargo vessel collides with a cruise liner, resulting in a multi-agency rescue effort.

The final scenario is a mock evacuation of people from Cape Panwa, intended to demonstrate the capabilities of two large navy landing craft: HTMS Wangnai and HTMS Mannok.

Organizers will be keeping a close eye on the weather leading up to the drills.

“Safety comes first,” said VADM Taratorn, “If the weather on Tuesday is too rough, we may not have the helicopter drill. However, I think the weather should be fine,” V/Adm Taratorn said.