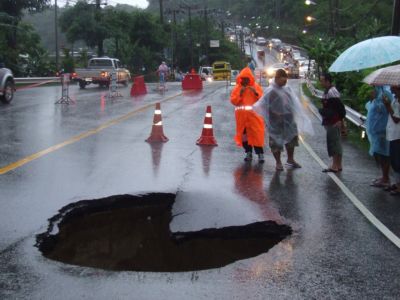 PATONG, PHUKET: A large sinkhole which opened up on the route from Phuket City to Patong following torrential rain last night received quick attention thanks to the vigilance of one Patong Municipal official.

The mayor of Patong himself, Pian Keesin, happened to be heading down Phra Baramee Road towards Patong at about 5pm – just as the surface of the road was beginning to fall away, creating the giant hole.

The mayor immediately began looking into it. There, he found the back wheel of his car, so he got straight onto the phone to his officials.

Police and Patong Municipality workers had the lane closed by around 5.30pm, by which time the gaping hole was three meters wide and five meters deep.

The hole was caused by water flow underneath the road, which softened the earth until it could not support the road surface any longer.

Traffic was disrupted until 4am today while workers used an excavator to fill the hole with earth.

Arun Sane, director of the Phuket Highways Department Office, said this was just a temporary fix.

“We’ll need to go to Bangkok to request budget to get the road properly supported and resurfaced,” he said.

Mr Arun estimated the work would cost around 2 million baht and take around one month to finish.

Construction could start within two or three months, he said.

Phuket Yamu back on track