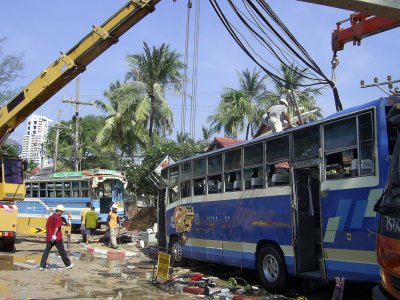 Mayor Pian Keesin today told the Gazette that municipal officials were still searching for bodies, but that 100% of those who suffered injury had already been sent to hospitals.

He said workers and vehicles had been hired to clear debris along the beach road, and that it would take about a month “to restore the area to its original condition”.

“I have already reported all the damage to Phuket Governor Udomsak Usawarangkura. I think the central government should provide us with special budgets to fix roads and damaged utilities, such as the power supply system,” he said.

He said there was no still power along the beach road because the power poles were toppled by the waves – and it was too dangerous to run power though them with so many pedestrians in the area and the clean-up operation underway.

He said that after the clean-up, he would use the disaster as an opportunity to ensure that redevelopment took place in accordance with the Municipality’s new town planning scheme.

He also provided his own harrowing account of the disaster.

“I was standing in front of my resort, the Patong Bay Garden Resort, when I was suddenly washed away about 200 meters before. Finally I managed to cling to a tree. I saw things weighing as much as two tons lifted up and floating away past me,” he recounted.

“We tried moving hotel guests to at least 300 meters from the beach. There was great chaos on that day and I still don’t know how I managed to survive,” he said.

Mayor Pian explained that efforts to start the clean-up yesterday were undermined by workers’ fear of another tsunami hitting the beach resort.

“Yesterday we tried to clear up the beach road using street-sweeping lorries, but even after we offered 10,000 baht an hour to get people to operate them along the beach road, we couldn’t find anyone brave enough to take the offer,” he said.