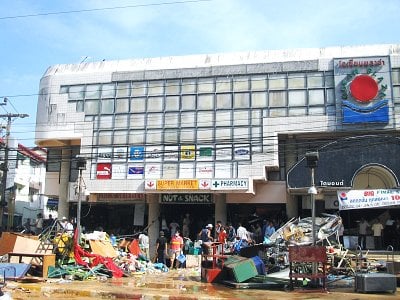 PHUKET: The Cabinet yesterday approved a 2.8-billion-baht emergency relief budget to help relieve the suffering of those affected by December 26 tsunami.

Interior Minister Bhokin Bhalakula said that during a video-conference Cabinet meeting in Phuket yesterday morning, PM Thaksin ordered that the search for bodies in the areas of the Phi Phi Islands and Khao Lak be intensified.

Bodies are now piling up in the corridors of the island’s three government hospitals, where facilities are inadequate to keep them all in cold storage.

K. Bhokin said there was a also shortage of coffins and cloth material with which to wrap recovered bodies. Identification was a problem and skin samples are being collected from each corpse in order to aid in their identification at a later date.

As the number of unidentified bodies continues to increase by the minute, police have been ordered to guard the corpses to prevent thieves from stealing any valuables they might be wearing, he added.

Figures released by the the Department for Disaster Prevention and Mitigation at midday confirmed 1,010 dead and 7,572 wounded, though the numbers are likely to grow higher as more corpses are recovered.

Phang Nga has so far seen the highest number of confirmed deaths at 537, followed by Phuket with 203 deaths, Krabi with 130 and Ranong with 129.

K. Bhokin said that many bodies were still trapped in the basement of Ocean Shopping Mall on the beach road in Patong, and that conditions there had made their removal difficult. Many of the bodies were bloated and decaying, he said.

Pol Gen Kovit Wattana, Commander of Royal Thai Police, told the Gazette that he had already ordered police from throughout Thailand to mobilize and assist in the relief and recovery effort. Some units have already arrived, he said.

Deputy Labor Minister Nakorn Silapa-acha said his Ministry would ensure that injured survivors would continue to collect regular salaries from their employers, and that those from other parts of Thailand wishing to return home could take advantage of free transport being arranged by the Ministry. Information was available at local Labor Offices, he said.

Phuket Marine Police Superintendent Pol Col Anant Huangsaithong said that efforts to return recovered bodies from the Phi Phi Islands had been hampered because of lack of assistance, as many local people were too afraid [of another tidal wave] to take their vessels to sea to assist in the operation.

He said he expected to recover more bodies from Phi Phi during the afternoon.

The Gazette has since confirmed that at around 4 pm, some 400 bodies arrived at Phuket’s Deep Sea Port from the Phi Phi Islands.