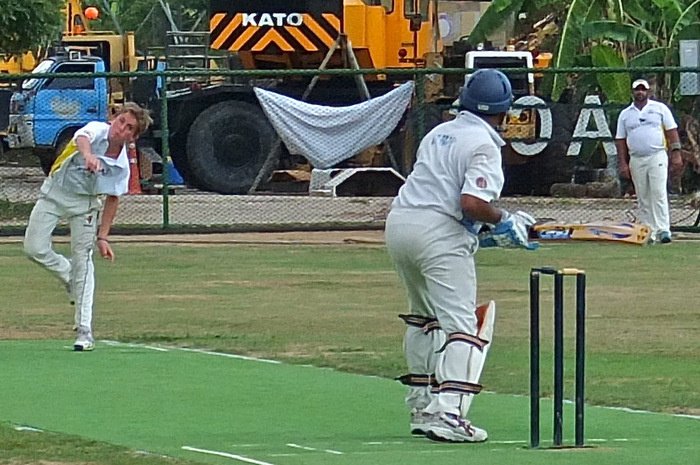 PHUKET: A dominant victory over Village CC by an innings and 257 runs at the Alan Cooke Ground (ACG) in Thalang last Sunday secured Patong CC the minor premiership and place in the league final, to be played on May17.

Both teams were missing many of their regular players, who were busy with work, travel commitments or out with injuries, and so Patong secured the services of brothers Mitchell Barrington, 15, and Tyson, 17, from Victoria, Australia.

The Barrington family had been in Thailand on holidays and playing cricket in the 28th Chiang Mai International Cricket Sixes. Their team ‘Hit n Miss’ were successful in their first tour, winning the ‘plate’ division.

The Village, meanwhile, could field a team of only seven players, which left lots of gaps between the fielders.

S ‘Paan’ Sriwang opened the bowling by sending opening batsman Seemant Raju back to the pavilion for a golden duck, after Paan sent the middle stump cartwheeling out of the pitch.

At the other end, the Village’s T ‘Pao’ Suttiprapha had Arif Mushtaq caught and bowled for just four runs at the end of the next over.

Regardless, a strong performance by the remainder of the Patong team ensured a defendable total of 350/8 after 40 overs – the highest first-innings score by any team this season.

Mitchell joined his brother in scoring 71 runs in a partnership of class batting. Tyson was finally out for 53 (29 balls) at the end of the 17th over, leaving Patong on 5/174. Neil Quail joined Mitchell and added another 88 runs to the total before Mitchell was dismissed on 63 (49 balls) just before the third drinks break.

Quail was caught and bowled by Pao for 62 (55 balls). Owen Pringle chimed in with a quick-fire 21 off 13 balls. Richard Desmond remained unbeaten on 39 (29 balls) and Paul Baker closed the innings not out for 1.

After the luncheon break, Tony Donovan and Mike Khan opened the batting for Village. Donovan was bowled twice by Mustaq. The first off a no ball, then out in the same over for 12.

Khan was the next to go in a steady procession of wickets for 7, caught by Tyson Barrington off his brother Mitchell’s bowling.

Paan and Andy Ghadge made a 46-run partnership before Paan was caught by Richard Desmond of the bowling of Mustaq for 15. Ghadge was joined by debutant Peter Khan, son of opening batsman Mike.

Peter caught by Tyson off the bowling of Mustaq for 1, while Ghadge remained unbeaten on 18 off 27 balls, though Village had collapsed to fall for 6/93 off 20.2 overs.

Player of the match went jointly to the Barrington brothers, as both Mitchell and Tyson were widely considered the best on the field.

Next in the league Thalang play Village CC at the ACG on April 26, and Island CC play Laguna in the final round of the season on May 3.

The semifinal of second versus third in the league will be played on May 10, with the winner going on to play Patong in the final on May 17.

Entry to watch the closing matches of the season at Alan Cooke Ground is free. Food and drinks are available at the ground, with excellent viewing available from the two-storey clubhouse.