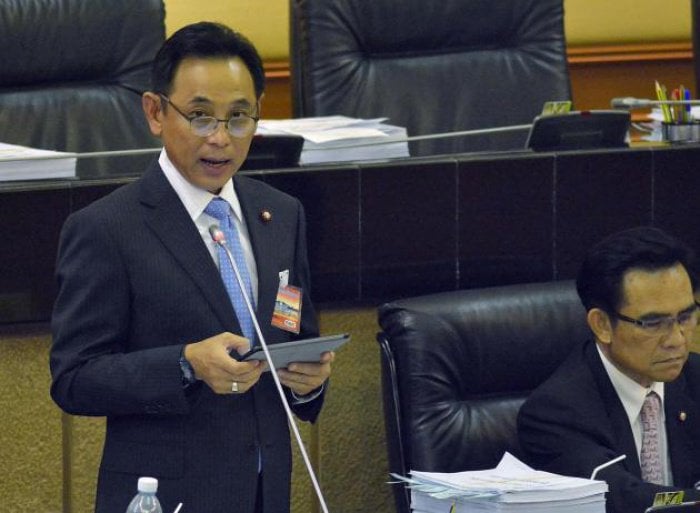 The scheme, he said, played a key role in “one of the most scandalous corruption cases in Thai history”.

However, former commerce minister Boonsong Teriyapirom said the allegations were part of a political game by the NACC, claiming the commission had chosen to single out and annihilate a political group by using “double standards”. He also accused the NACC of rushing the case through without taking into account important witnesses and evidence, which led to false conclusions.

The NLA held a second meeting yesterday to deliberate on impeachment cases against public officials in relation to alleged corruption in the G2G scheme. The first meeting was held earlier this month.

At yesterday’s meeting, which was chaired by NLA president Pornpetch Wichitcholchai, Vicha presented the case statement on NACC’s behalf. Boonsong and Poom came armed with a team of 11 lawyers.

In the question-and-answer session, Vicha questioned the very existence of the Chinese government representatives who had engaged in the deal. He pointed out that Beijing had claimed that these “state enterprises” were not their representatives.

Mr Vicha also asked why the companies Kwang-Tung Stationary and Hai-Narn Grain and Oil Industrial Trading – who the Pheu Thai-led government claimed were representatives of the Chinese government -sold the rice back to Thai local distributors. He backed this claim by saying local firms Nakorn-Luang Ka-Kao and Thai-Fah 2551 had both come forward to say they bought rice from the Chinese companies.

He also said documents issued by the Foreign Trade Department recording the so-called sale to China only accounted for a single ex-warehouse transaction. Mr Vicha said the deal was in fact with North Korea and the transaction had to be cancelled because no payment was ever made.

“There was never any G2G deal because the rice was sold at less than market price and then redistributed in the country. This created an oversupply, pushing the price even lower,” Vicha pointed out.

The NACC member also accused the officials of doing nothing to prevent corruption or making any effort to organize fair bidding. “You have caused immeasurable damage to the country. You cannot deny responsibility because you had direct power in overseeing the G2G affair. If you detected any error, you should have fixed it. In reality, though, you did the opposite by committing [corruption], hiding and denying the corruption. You have severely violated the official code of ethics,” he concluded.

Mr Boonsong, however, denied all the charges and even criticized the behavior of Vicha, who played a key role in Ms Yingluck’s impeachment.

“This NACC official is prejudiced and engaged in improper conduct that demonstrates his personal bias against me by giving media interviews indicating that I’m guilty,” he said.

The former minister went on to say that it was difficult for him to believe he will undergo a fair and legal deliberation process now that the case has been handed over to Mr Vicha.

He claimed that NACC was using the same double standards against him as the ones it used against Ms Yingluck’s administration, in comparison to the Abhisit Vejjajiva government’s rice scheme, which is still incomplete after five years.

He went on to say that the NACC had rushed the G2G case by refusing to investigate the buyers, who were representatives of the Chinese government. He added that these firms had sent the NACC official letters confirming the fact that they were state enterprises. He claimed that the rice-pledging scheme is being used for an artificial political discourse to discredit the Yingluck government.

“It’s a shame that those against Pheu Thai turned the rice scheme into political discourse to bring down Ms Yingluck’s government, even though the scheme helped millions of farmers,” he said.

Mr Boonsong said the G2G system has been widely used in many countries and that Thailand too had engaged in it several times in the past.

Mr Poom agreed, saying the G2G deal was beneficial to the country because the government did not want the stockpiled rice to degrade or rot and that releasing the whole lot through this deal was the best option.

He also pointed out that if the G2G deal had been delayed, the price of the rice would have dropped further and there would have been the additional cost of storage and tax. Plus, he said, it forged stronger ties with China.

The NLA will meet again next Thursday to pose questions to all sides.

The final statements will be presented on May 7, and the NLA will vote for or against impeachment the following day.