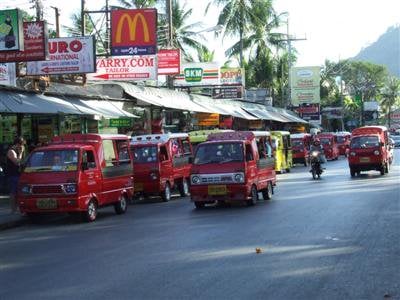 PATONG, PHUKET: More than one thousand tuk-tuk, motorbike and car taxi drivers are banding together to form a new ‘Patong Taxi Federation’.

One of the organization’s primary goals will be to clean up the image held by many of Patong’s taxi drivers.

A second aim will be to improve traffic flow by having a central body that will oversee all three types of transport.

The federation, formally established on Monday, is the brainchild of Patong Municipality.

Around 90 members elected Setthasak ‘Ko Aew’ Buason as temporary president of the Patong Taxi Federation at its first meeting.

Ko Aew already leads a group of more than 500 saloon car and minivan drivers in the town.

“The federation wants to improve the image of Patong and make Patong the number one tourist destination in the world,” he said.

“When tourists come here they will see a town that looks beautiful and organized,” he said. “They’ll also have more space to park their cars.”

With the aim of improving traffic flow around Patong, the federation will set up fixed stands from which the various types of taxi will pick up passengers.

“Right now tuk-tuks parked at the side of the road are creating traffic jams, but the problem can be solved,” he said.

Rental cars parked along the beach road were also a major problem, he said.

A call center will be set up to assign taxis for passengers.

“They won’t be driving around looking for customers like they do these days,” Ko Aew said.

A meeting with other taxi groups would take place soon and a new president might be chosen as a result, Ko Aew said.

All Patong taxis will have to join the federation. Members will be issued stickers allowing police and municipal officials to check if they are members, Ko Aew said.

The federation will collect information and conduct background checks on all its members, he said.

“We admit that in our group most members still run black plate [unregistered] taxis. We’re going to set up a cooperative for black plate taxis and get them properly registered with green plates,” he said.

Asked if the reputation of Patong taxis, particularly tuk-tuks, was affecting tourism in Patong, Koh Aew said he thought the poor state of the tourism economy was a world-wide problem, not one particular to Patong.

“Before these problems became well-known, people were still visiting Patong. It depends on how the media presents the story to the public.

“If the media do so positively, it will help. But, anyway, fewer tourists are coming here because of the global economic crisis,” he said.

“Not many Thai people come to Patong, but we expect this project will increase their numbers,” he added.