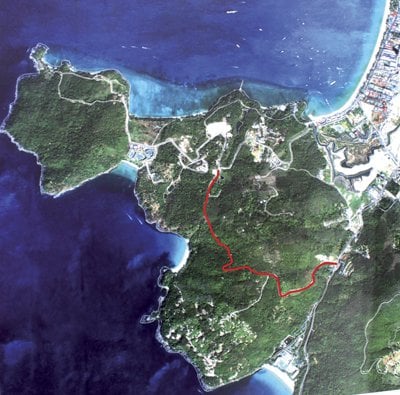 PHUKET: THE Patong Municipal Council has agreed to fund a study to look into building a new road to access Freedom Beach, crossing over public forest land in the area.

The road was among several proposals unanimously approved by the council during its budget meeting last week.

Patong Mayor Pian Keesin presided over the meeting, which was attended by 15 of the town’s 18 council members, more than enough to meet the quorum requirement of 14.

The council agreed to fund a study to upgrade the existing Ratprachanukrok Road, which heads north off Sirirat Road towards Patong’s southern headland before entering public forest land and turning into a dirt road.

The new road would connect with Muen Ngern Road near the Merlin Beach Resort. The cost of the study should not exceed 4 million baht, Mayor Pian said.

If the project’s Environmental Impact Assessment (EIA) is approved, the municipality will then move to find funding for the project, which would require the acquisition of over six rai (about one hectare) of protected forest land.

Upgrading the road would improve access from the south to Freedom Beach, Tri Trang Beach and Paradise Beach, which can currently only be accessed from the congested south end of Patong Beach via Muen Ngern Road.

It would also increase security for tourist and local residents by serving as a new evacuation route in the event of a tsunami or other natural disaster, Mayor Pian said.

Councilor Sahut Jarungklin, who voted to approve the study, said, “I am quite amazed at the pace of development that Patong has undergone, even reaching as far as Tri Trang Beach. However, we also have to consider related problems that will arise such as water and electricity supply as well as trash collection.”

Mayor Pian assured Councilor Sahut that all such issues would be addressed in due course if the project becomes a reality.

Another road project approved was the expansion of a 55-meter stretch of the narrow Nanai Soi 8, which runs along Klong Pak Lak connecting Nanai Road with Phang Muang Sai Kor Road, to eight meters wide. The budget approved was 2.5 million baht.

“If the road is expanded, taxis and tuk-tuks should not be allowed to obstruct traffic flow by parking in columns along both sides, like they already do in many other areas.

“If that is allowed to happen, it will further inconvenience motorists by narrowing the available road surface back down to what it was before, thus defeating the whole purpose,” he commented.

Mayor Pian assuaged his concerns by saying a meeting would be set up with “taxi businesses” to gain their co-operation, with local police responsible for enforcement of parking regulations.

Such a meeting should not be hard to arrange for Mr Pian, whose son Preechavude “Prab” Keesin is president of the Patong Taxi Federation and President of the Pisona Group of businesses that enjoys transport concessions throughout the town.

The end of term for the current council is June 26. New elections must take place within 45 days of that date.