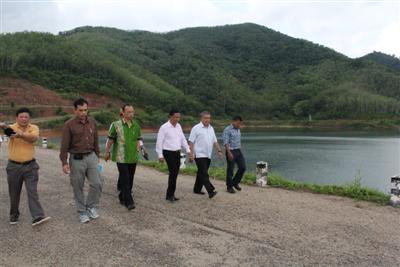 The inspection was prompted by a series earthquakes centered in Thalang over the past few days, including a 4.3 Richter tremor yesterday morning. That quake left local residents living downstream fearing the structural integrity of the dam might have been compromised, putting them at risk of flooding if it gives way.

A walking inspection along the top of the 680-meter-long dam by Phuket Vice Governor Somkiet Sangkaosutthirak, technical experts and other local officials revealed no signs of cracking at the dam.

Mr Suwit inspected a pressure-sensor cabinet at the site, which indicated that the dam and its granite core had not been affected by the recent jolts.

The tour also included the dam’s spillway, through which water in excess of the reservoir’s capacity flows.

“We are confident the dam is strong enough to withstand earthquakes. Local residents can feel at ease. We would also like them to reassure them that we are paying careful attention to these earthquakes,” V/Gov Somkiet said.

Sombat Puangsombat, director of the Irrigation Department office in Phuket that oversees the operation of the dam, also confirmed that no damage occurred as a result of the recent quakes.

Mr Suwit explained that the structure, 860 meters long, eight meters wide and 30 meter high, allowed the reservoir behind to have a total storage capacity of about 5 million cubic meters.

“Initially, we found no damage at the top of the dam. The overall condition of the dam is still strong. Dams are designed to be able to withstand earthquakes. The most important thing is that the core of Bang Neaw Dum dam is constructed of granite, which can absorb vibrations very well,” he added.

The inspection was a standard procedure after an earthquake, he said.

Recent seismic activity along the Klong Marui Fault that runs past Phuket was likely related to much larger quakes off the coast of Sumatra that left the fault displaced, he said.

The epicenter of yesterday’s earthquake was located somewhere near the Baan Soi Bang Kham community in Thalang, he said.

Srisoonthorn Mayor Worawut Songyot said the earthquake centered in the Srisoonthorn area and subsequent aftershocks left many local residences concerned about the dam’s condition and asking for an inspection.

“So I came here today and am glad that no damage has been found,” he said.