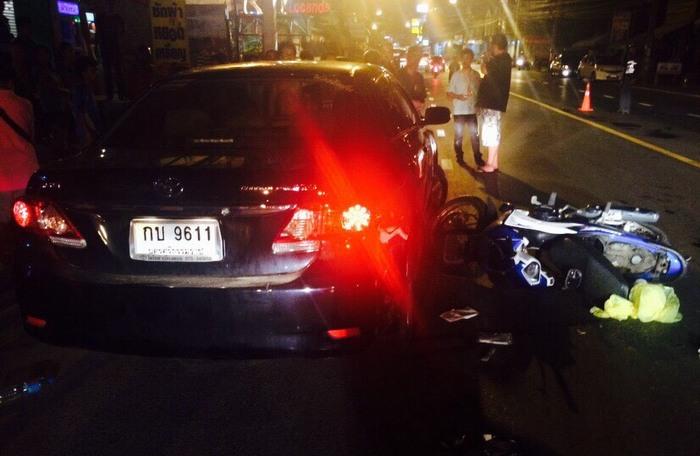 PHUKET: A woman severely injured in a Phuket traffic accident is demanding justice for her dead German partner, following police failing to conduct a blood alcohol test on a man who allegedly had admitted to drinking prior to the fatal accident on December 3.

“I was conscious, but unable to move immediately after the accident. The driver didn’t stop; he kept trying to drive forward over the top of my boyfriend. I couldn’t do anything,” Patcharin Lammai, 35, told the Phuket Gazette from her hospital bed. “Thankfully, a tuk-tuk driver and local man who witnessed the accident were able to stop the driver.”

“The couple were on their way to Chalong from Kata when they were in an accident with a car driven by Jakarin Rodpradit, 26,” explained Lt Nipon Temsung of the Karon Police.

Ms Patcharin alleged that Mr Jakarin told witnesses that he was not drunk, but had in fact been drinking.

Police confirmed to the Gazette that officers at the scene did not corroborate this information with a statement from Mr Jakarin or the witnesses.

“The two officers at the scene did not ask Mr Jakarin whether or not he had been drinking,” said Lt Nipon. “We also have yet to question any witnesses about this accident.”

Police detailed the incident in their report, seized Mr Jakarin’s driver’s licence and allowed him to return to his vehicle and go on his way.

“I later learned that police did not even test the blood alcohol level of the driver,” Ms Patcharin said. “Why haven’t any police officers come to question me about the incident? Why did they let the driver go free?”

Ms Patcharin has pressed a reckless driving causing death charge against Mr Jakarin, who had returned to work the day after the accident.

At police-conducted negotiations on December 8, Mr Jakarin denied all charges. He told police that Mr Walter was, in fact, the one driving recklessly.

Ms Patcharin’s relatives have independently been building a case against Mr Jakarin, searching for CCTV footage that might reveal exactly what happened.

“Unfortunately, they weren’t able to find any CCTV cameras that caught the accident. However, I am grateful that there were witnesses. The driver should have braked – if he had, my partner may not have died,” Ms Patcharin said.

Mr Jakarin is out on bail, while police continue their investigation.