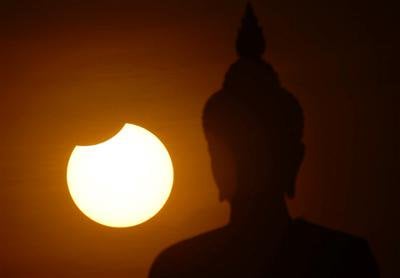 PHUKET CITY: Weather permitting, a partial solar eclipse will be visible in Phuket on Wednesday morning.

The eclipse, blocking about 20% of the sun at its peak at 8.10am, will last around six minutes.

Rajabhat Phuket University is hosting a viewing event at the traffic circle in front of the Dean’s Office on the Rajabhat campus.

Assistant Professor Sakchai Phetchuai from the Department of Physics said all schools in Phuket have been invited to attend.

The event is also open to the general public. Eye protection will be provided free of charge.

A total solar eclipse will be visible in parts of India, Nepal, Bangladesh, Bhutan, Burma, China and Japan.

Parts of northern Thailand will have as much as 60% blockage.

The eclipse is the longest that will occur in the 21st Century, lasting for up to 6 minutes 39 seconds in areas where it is total.

Given that the eclipse falls during the the 43nd Asean Ministers Meetings underway from today at Laguna Phuket, residents are strongly advised not to discharge firearms into the sky during the eclipse.

The island is on heightened security status under the provisions of the Internal Security Act invoked by Cabinet from July 10 to 24.

Traditional Thai and Chinese belief is that a solar eclipse is caused by a great celestial dragon attacking the sun, attempting to consume it.

It is therefore the responsibility of good citizens to try to frighten the giant away by making noise: banging cooking pots, lighting fireworks and, more recently, shooting into the air.