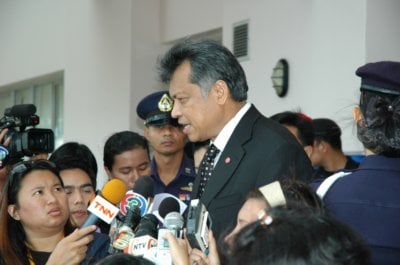 PHUKET: The bomb blasts which shattered Jakarta’s Ritz-Carlton and JW Marriott Hotels this morning, killing at least nine people and injuring dozens more, have sent the topic of terrorism rocketing to the top of the agenda at the 42nd Asean Foreign Ministers Meeting which got underway in Phuket today.

Asean Secretary General Dr Surin Pitsuwan said officials and delegates were confident the tight security measures in place in Phuket, especially around the host venue Laguna Phuket resort, would be enough to ensure the meetings were not disrupted.

News of the blasts at the luxury resorts in Jakarta have shifted the focus from the visit of US Secretary of State Hillary Clinton to the ability of Prime Minister Abhisit Vejjajava’s Democrat led Government to show it can host the summit after the disruption of the Asean Summit in Pattaya earlier this year.

Dr Surin said stability between North and South Korea was also high on the Asean agenda, and delegates from both nations would attend the meetings.

Phuket Provincial Police Commander Pikat Tantipong said contingency plans were already in place to secure all resorts on the island.

“Phuket’s security is now in the hands of the Thai army after the Internal Security Act was enforced to ensure the Asean meetings went smoothly,” he said.

A high-ranking army chief said the five-kilometer security cordon around Laguna Phuket provided sufficient protection for the Asean delegates and would not be extended any further.

“The Jakarta bombings are not a problem for Phuket,” he said.

“There is no need to bring in any extra troops. Tight security measures are already in place.”

The bombing of the JW Marriott in Jakarta has created extra concerns for American security officials with US Secretary of State Hillary Clinton expected to stay at one of the island’s luxury resorts.

Mrs Clinton is expected to arrive in Phuket with her own security team, but it is not known if that security will be beefed up as a result of this morning’s Jakarta bombings.

“The Jakarta bombings are certain to consign those issues to the back burner, and the spotlight will now focus on terrorism,” he said.

“Indonesia had reaped the benefits of the political upheaval in Thailand, which forced organizers to postpone the Asean conference earlier this year,” he said.

“During the past six months, Bali has overtaken Phuket in hotel occupancy rates and seized the crown as Asia’s leading resort destination. However, the latest round of bombings would have a drastic effect on Indonesia’s tourist industry,” he said.