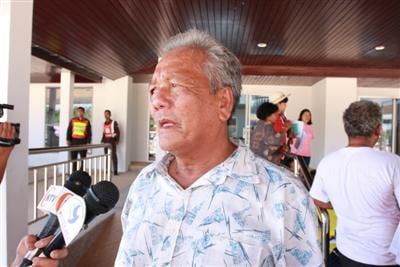 MAI KHAO, PHUKET: Twenty families in Mai Khao have signed a petition vowing to fight an order to vacate government land earmarked for construction of the new Police Region 8 headquarters, scheduled to open in 2011.

Plans to move the existing Region 8 headquarters from Surat Thani province to Phuket were set in motion in 2007.

The 224 rai in question is administered by the Treasury Department’s State Property Management and Services Office, or Ratchapassadu, which has leased plots to the 26 families.

All 26 families will have to abandon their homes before construction can begin.

Police had their hands full dealing with the irate villagers when they handed over the letter of complaint to Mai Khao Mayor Sarawuth Seesakhukham.

Signed by 20 family heads, the letter charged that they had received inadequate information about the project, which was initiated with no public hearing process.

All 20 signatories vowed not to leave their homes.

Six other families accepted compensation packages, which ranged from 1,700 baht to 825,100 baht.

A total compensation payout of over 4.4 million baht is on offer for the land.

Region 8 Deputy Commander Gen Udom Chaimongkolrat told the Gazette police did not want to push the families off the land, but had no other choice.

Residents who refuse to accept the compensation will be charged with encroaching on government land and will lose their right to any compensation, he said.

Residents who received compensation have been given 30 days to vacate, though farming families would be given longer to harvest their crops.

A fence would be erected in coming weeks to close off the construction area, Gen Udom said.

One resident who refused compensation was 75-year-old Thanorm Maliwan.

The 20,000-baht compensation offered to him wasn’t enough to relocate, he said.

“We need the situation to be handled more fairly. We are not against the construction of the new headquarters, but we are against being pushed out of our homes,” he added.

His family lived on the land for hundreds of years before it was registered by the Treasury Department as state land, he said.

He is adamant he will not vacate, saying he had evidence to prove his family’s long occupation there.

Compounding the delay in progress of the new headquarters is the cost of demolishing existing buildings and compensating farmers for loss of earnings, as well as the presence of a sea gypsy graveyard in the construction area.

Songsri Boonchup, whose family accepted the compensation, said her family had farmed the land for over 40 years but did not live in Mai Khao.

The majority of families who refuse to vacate have nowhere else to go, however.

Mayor Sarawuth said the Treasury Department would find new land for poor long-time residents of the area, but no compensation would be given to those unwilling to leave.

Minister Sathit is scheduled to arrive in Phuket next Thursday and will inspect the area personally, one of the agents told the Gazette.