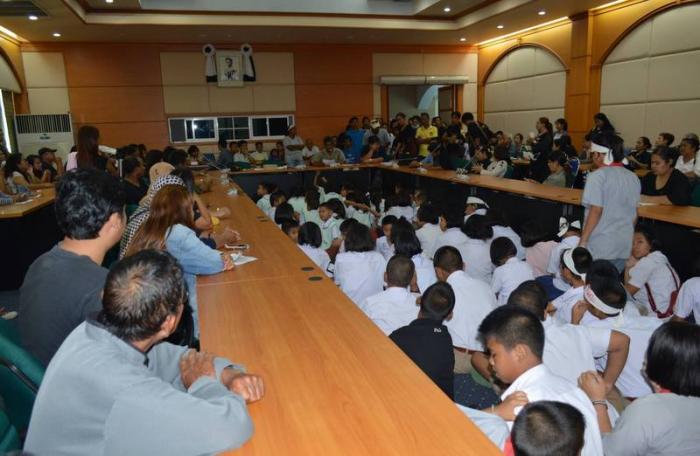 PHUKET: At least 200 parents and students gathered at Phuket Provincial Hall yesterday morning to protest against the closing of the Phuket City Municipality kindergarten.

The group was led by Chanakan Nansang and Pranee Thongkao, with several protesters carrying signs that read ‘Why close the kindergarten and open a secondary school?’

Ms Chanakan said that Phuket Municipality School had not issued an announcement about the closing of their kindergarten section for the academic year 2017, and instead circulated a draft notice on the school board.

An additional secondary school section has temporarily replaced the kindergarten section. The purported reason behind the closure is ‘updating the educational system’, but further explanations were left for a future meeting.

“We submitted a letter to the Phuket City Mayor on January 12, but did not receive a clear response, as she is in Bangkok. She did try to explain some of the reasons over the phone, but the bottom line is that this is not acceptable to us,” said Ms Chanakan.

Phuket City Mayor Somjai Suwansupana had previously asked to meet the parents on February 6 for further discussions, but they denied, saying that it would be too late by then, as other schools will already have started classes.

The protesters intended to submit a letter of complaint to Phuket Governor Chokchai Dejamornthan, which was accepted by Capt Boworn Promkeawngam of the Royal Thai Navy’s Phuket-based ‘Third Area Internal Security Operations Command (ISOC)’ on his behalf.

Capt Boworn also ordered the Damrongdhama Center (ombudsman’s office) to call both sides for a meeting “as soon as possible”.