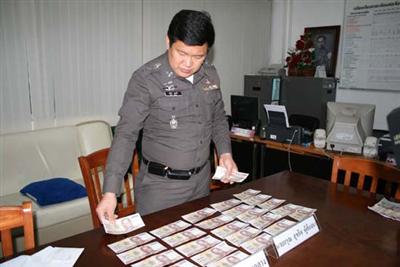 PHUKET CITY: Believing the problem of counterfeit banknotes to be serious, Phuket Provincial Administration Organization (OrBorJor) President Paiboon Upatising has spent his own money to buy 1,000 UV flashlights, which he distributed to vendors at two wet markets in Phuket City on January 23.

Mr Paiboon gave the devices away free to traders at Kaset Market, the fresh market near Robinson department store, and the Downtown Market on Ranong Road.

There have been a number of well-known counterfeiting cases in recent months in Thailand, with fake 1,000-, 500- and even 20-baht bills being detected.

Wet markets are thought to be hotspots for the passing of fake bills. Criminals are known to favor the morning, when light is poor and vendors are not as alert, as the time to pass on the counterfeits.

Mr Paiboon’s actions followed reports that some merchants at fresh markets were refusing to take 1,000 baht and 500 baht notes, fearing they might be fake.

He got the idea to buy the UV lights while on vacation in Haad Yai, where he saw them on sale at a market and realized they could be used by traders in Phuket to detect fake bills. The UV flashlights enable vendors to easily check a banknote’s watermark for authenticity.

The fake banknote situation had become an emergency, with vendors becoming suspicious of each other and quarreling. The OrBorJor had to act to take action to restore vendors’ faith in the currency, he told the Gazette.

Mr Paiboon said he spent between 30- to 40,000 baht of his own money on the flashlights, though was unable to quote an exact figure. He intends to return to Haad Yai to buy more flashlights, which he will distribute to traders at Thalang wet market and Banzaan Market in Patong.

“This is the Chinese New Year season,” he said. “The flashlights are ang pao for the people,” he added, referring to the custom of older people giving youngsters money in red envelopes at Chinese New Year.