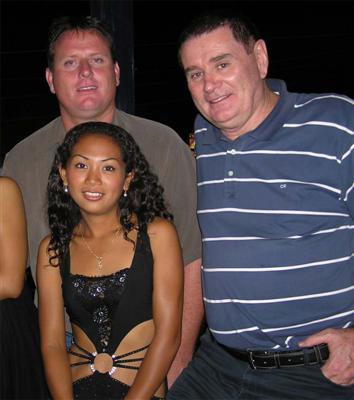 PHUKET: A cremation service will be held tomorrow for Australian Rex Allen, who died Tuesday in a motorcycle accident in Kalim. He was just 37 years old.

A former professional golfer, Mr Allen leaves behind a wife and four children, including two young boys by his Thai wife Root.

Rex was on his way home from celebrating Australia Day in Patong on Monday when the tragedy occurred on the Patong-Kamala Rd in Kalim.

Mr Allen was well-known to the island’s expat community as the former manager of Didi’s Swiss Resort in Patong.

His good friend Rob Gregory described him “as the kind of guy who would give you the shirt off his back”.

The service will be held at the crematorium next to the public library on Haad Patong Rd in Patong at 1 pm.

A foundation will be set up to help provide for his wife Root and their children, one of whom suffers from a congenital heart problem. For more information contact Rob Gregory by email at: rgreg@loxinfo.co.th

Mr Allan’s death was the tenth road death on Phuket roads in a one-week period starting on January 21.

Last Saturday, 69-year-old Lien Tan-in was killed instantly when the motorbike she was riding pillion on was hit by a six-wheel truck on the bypass road southbound in Rassada. The motorbike driver, the victim’s 40-year-old daughter Sudarat, was rushed to Vachira Phuket Hospital for treatment for multiple injuries. She told police she was driving her Honda Wave with her mother from their home in Khok Kloi in Phang Nga to Tesco-Lotus when they were knocked over by a six-wheel truck. Police were unable to find the driver of the truck, which sped on without stopping.

At 10 am on January 24, three young women died when the Honda Click they were riding was hit by a cement truck on Lakkongsee Rd in Rassada. Killed at the scene was Miss Puangpayome Yotrasarn, age 27. Two other women, 27-year-old Yasothorn native Ladarin Kaewlee and 25-year-old Kosama Makhakhet of Satun were rushed to Vachira Phuket Hospital, where they died soon after arrival.

The truck driver fled the scene but later turned himself in to police.

At about 10 pm on January 26, a Toyota Vios driven by 47-year-old furniture shop owner Pornthep Suwannarang of Rassada hit a power pole on the curve in the westbound lane of Phra Phuketkaew Rd in Kathu. He died at the scene of a broken neck. His passenger, 55-year-old Sa-ard Rittisonthi of Ayudhya, was pronounced dead on arrival at Phuket International Hospital.