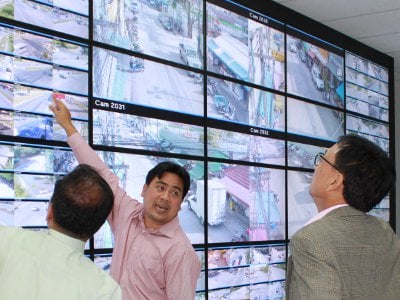 Paiboon Upatising, as one of his first official acts since being re-elected OrBorJor president in the election on April 8, led authorities on an inspection of the control center, which is located at the OrBorJor hospital in Rassada.

The control room, with access to footage recorded by 250 CCTV cameras, is the biggest CCTV network in Thailand outside of Bangkok, Mr Paiboon said.

The control room will also be able to check CCTV feeds from other networks, such as those used by the Chalong and Phuket Town Police Stations, which will help police and local administration organizations coordinate crime-fighting efforts, Mr Paiboon explained.

“We are ready for the upcoming Phuket Youth Games… We have caught hundreds of suspects because of CCTV recordings – so the public has nothing to worry about,” he added.

An estimated 14,000 athletes, fans, supporters and spectators are expected to arrive on the island for the Youth Games, which will be held in Phuket from May 26 to June 5.

Dubbed the “Phuket Games 2012“, the event comprises 40 different sports to be contested by young athletes from across Thailand