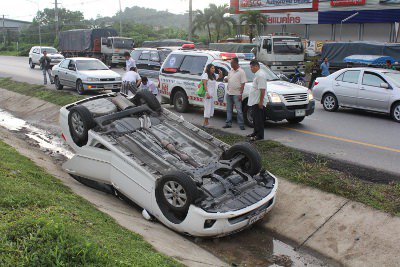 PHUKET: A car ended up on its roof in the central ditch on Phuket’s bypass road this morning when the possibly drunk driver of a saleng (motorcycle with side car) cut in front of the vehicle.

The motorbike driver and the driver of the car both escaped injury, but the car’s only passenger, the driver’s 20-year-old son, sustained minor injuries.

Phuket City police received the report at about 6:50am and dispatched police to accompany Kusoldharm Foundation rescue workers to the crash site, opposite the Nam Saeng Rice Trade store.

At the scene the police team, led by Lt Col Chetsada Saengsuree, found a Toyota Atlis upside down in the drainage ditch.

Police inquiries revealed that the driver of the Toyota was Sawarin Mametta, a 46-year-old resident of Srisoonthorn, Thalang.

Ms Sawarin told police that she was driving with her son to Phuket Town when the accident happened.

“A saleng suddenly swerved in front of me and was weaving left and right across the road. I slammed on the brakes to slow down but lost control and overturned, finally stopping upside down in the ditch,” she said.

“I was terrified but managed to get out of the car. Luckily, I wasn’t injured, but my son injured his right knee,” she added.

The police later identified the driver of the saleng as Tanom Moonrat, a 36-year-old living near Rassadaram Temple. He did not flee the scene.

Col Chetsada was unable to confirm if Mr Tanom was driving under the influence of alcohol as the police team were not equipped with a breathalyzer kit.

“I will get him tested for alcohol and investigate further,” said Col Chetsada.