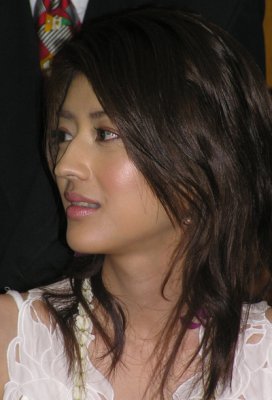 PHUKET: Top Japanese actress Maju Ozawa is to make a 54-minute TV show for presentation in her home country in order to promote Phuket to the Japanese market.

Ms Ozawa, who yesterday signed a contract with the Phuket Tourist Association to promote Phuket for a year, won the job after she took part, along with six other Japanese actresses, in the game show Golden Mr A, Silver Mr A on Japanese TV.

The seven contestants were each asked one question about Phuket, with the winner gaining the right to promote the island.

Ms Ozawa arrived in Phuket yesterday at 3 pm, going to the Diamond Cliff Resort and Spa and the Evason Phuket Resort and Spa. Today she visited the Kata viewpoint then went to check out the tsunami alarm systems in Patong before going to a demonstration of Thai cooking.

Ms Ozawa explained through a Japanese translater that even though this was her first time in Phuket, she will try her best to promote Phuket’s natural beauty in Japan.

She said, “Right now, everything is recovering and it doesn’t feel like there was a tsunami here at all. The alarm system gives me confidence to travel here and makes me feel safe. I’ll try to bring Japanese tourists back to Phuket.”

The President of the Phuket Tourist Association, Pattanapong Aikwanich said, “I believe that this presentation could help to boost the Japanese market in Phuket because Ms Ozawa is one of the most popular Japanese actresses.

“NTV has about 60 million viewers. People can see her tasting local fruit, where she is staying and where she is visiting. She is the best choice to show images of Phuket.

“The Japanese market right now is still very quiet. The PTA is consulting with the Tourism Authority of Thailand (TAT) to do a road show in Tokyo and Osaka, and we hope that airlines will restore direct flights to Phuket soon.”

He added, “If the Japanese are sure that it is safe to travel, they will come back to Phuket, it is in their nature. This presentation [by Ms Ozawa] will help to boost the Japanese market.”