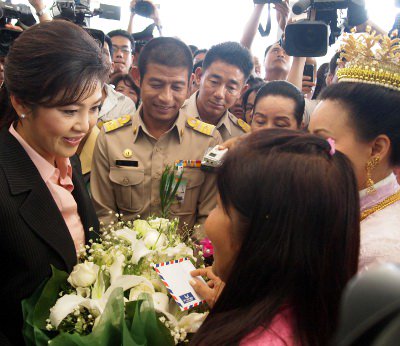 PHUKET: Joining the long list of groups petitioning Prime Minister Yingluck Shinawatra for special attention during her first official visit to Phuket for today’s Cabinet meeting was a delegation of doctors, nurses and medical students from Songklanagarind Hospital in Haad Yai.

PM Yingluck arrived at the Prince of Songkla University (PSU) Phuket Campus at 8:30am to attend the Cabinet meeting today.

However, before she reached the door, she was greeted by a crowd of people, including the delegation from Songklanagarind Hospital, which is part of the PSU main university campus in Songkhla.

Songklanagarind Hospital is renowned as the leading medical research facility and the top choice for medical students in Southern Thailand.

The delegation handed PM Yingluck a letter of complaint to ask her to review the Cabinet resolution to not induct the hospital staff into the public service.

The hospital staff are currently contract employees hired by the government, which does not qualify the staff at the hospital to the same full benefits as enjoyed by full-time government officers.

“The decision affects our career stability. Some hospital staff have quit their jobs to join other organizations where they have a chance of becoming government officers,” explained one delegate.

Another group, of about 500 people, petitioned PM Yingluck to consider spending six billion baht on creating a medical training and public healthcare facility at the Thaksin University campus in Phatthalung.

Many of the group were from the Phatthalung Provincial Administrative Organization (OrBorJor).

“A lot of people in Phatthalung, Satun, Trang, Nakhon Sri Thammarat and Krabi use the medical services available at Songklanagarind Hospital because it is hard to find the same quality public healthcare in their own province,” said one delegate.

Under the plan, the Thaksin University Phatthalung Campus would develop its own educational and medical service center, costing 6bn baht provided during the fiscal years 2012 to 2016.

The first year, however, would require just over one billion baht to set up a 200-bed university hospital and Chronic Patient Center, explained the delegate.

Chalerm in Phuket: Police to focus on drugs, not closing times