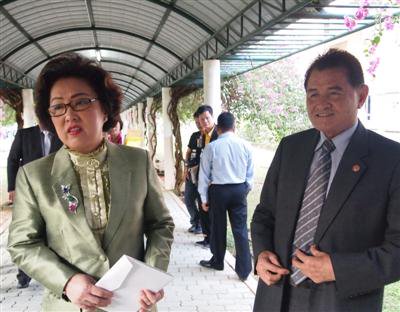 The unscheduled talks, which were off-limits to reporters, saw PM Yingluck meet with Phuket Senator Thanyarat “Ghee” Achariyachai, who chairs the Senate Standing Committee on Tourism, as well as fellow committee member Wichai Phraisa-ngop, a former Governor of Phuket.

The meeting was one of several that took place in a meeting room at the Prince of Songkla University Phuket Campus in Kathu late yesterday afternoon.

After the meeting, Senator Thanyarat told the Phuket Gazette that she recommended action by Cabinet in addressing many developmental issues facing Phuket because of its booming tourism industry.

PM Yingluck said her committee had received numerous complaints from tourists about unregulated activities on many island beaches. These appeared to be beyond the ability of local administrative bodies and other responsible agencies to control.

She thus requested Cabinet to get involved by setting up a work group to study the issues in depth and come up with an integrated reform strategy to take back and better regulate acceptable activities at beaches, which remain the island’s most important tourism asset.

Sen Thanyarat also asked PM Yingluck for the government to consider the long-standing issue of insufficient central government funding for Phuket, which is unlike other provinces in that its tourism industry attracts 4 to 5 million visitors annually.

As such an important revenue generator for the national economy, Phuket should be established as a “special economic zone for tourism”, she said she told PM Yingluck.

Yesterday’s meeting provided a forum for PM Yingluck to discuss this and other issues with Andaman region tourism industry leaders, she said.

PM Yingluck said she was already informed of many issues facing the growing tourism industry, including recent complaints about long lines to clear Immigration checkpoints at Suvarnabhumi Airport in Bangkok as well as Phuket Airport.

However, seeing the situation first-hand improved her understanding, she said.

She intends to visit more regularly and set up a team to establish a systematic plan to study Phuket’s problems and make recommendations on how to solve them, she said.

The meeting was the last on PM Yingluck’s busy schedule yesterday, which included: meeting with protesting sea gypsies and other slum dwellers at Phuket Airport; a trip to Phang Nga to visit tsunami memorial sites; a stop at the Satree Phang Nga School; a visit to the site of the long-delayed road project at Klong Koh Pee in Wichit; opening of a One-tambon One Product (OTOP Fair) at Saphan Hin; and a brief stop at Prince of Songkla University, where the mobile cabinet meeting begins today.

The Thai premier is staying at the Hilton Arcadia Phuket Resort & Spa in Karon during her stay here.

Chalerm in Phuket: Police to focus on drugs, not closing times

PM Yingluck makes no promises ahead of Cabinet meeting