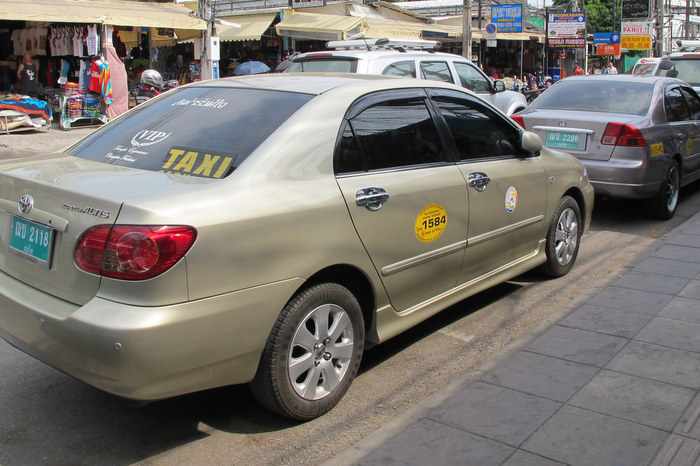 “Police have just been fining and then releasing drivers. However, from August 1 onward, if police apprehend any illegal taxi driver, they must send the case directly to court and seek the highest penalty for the offender,” said Mr Terayout.

“We are now sending notices to every police station on the island to crack down on all illegal taxis.”

According to the Land Transportation Act BE 2522 section 23 the penalty for an illegal taxi driver is a maximum fine of 100,000 baht, two years imprisonment or both.

Mr Terayout also announced that the PLTO has opened up registration at its office for anyone wanting to apply to become a legal taxi driver.

The taxi meter rates are the same as they have been since 2003, said Mr Terayout. The starting fare is 50 baht for the first two kilometers; then the fare per kilometer is seven baht up to 21km and six baht per kilometer after that.

“We sent a letter to our head office in Bangkok in November 2012 that asked for higher meter fees, as the cost of living and cost of gasoline have increased since 2003. The proposal is still under consideration,” said Mr Terayout (story here).

“The requested meter fee are 50 baht for first 2km, then the fare per kilometer is 12 baht up to 15km and 10 baht per kilometer after that.”

The PLTO has established guidelines for drivers wanting to become legal metered taxis in an effort to standardize services (see Special Report here).

When asked about strategies to prevent metered taxi drivers from forcing fixed rates on customers, Mr Terayout asked clients to call the complaint center at 1584.

“When you call, please remember to tell us the licence plate number, date of the trip and the destination. Our staff can speak both Thai and English,” he said.

“Within seven days of a notification, we will call in the taxi driver in for questioning.”

“At this stage, Patong and Kata-Karon are determining a place for their taxis to park, and are setting up a telephone number for their call centers. Once they have a number, we will distribute it to venues throughout the island to kick-start the project and promote it to tourists,” said Mr Terayout.