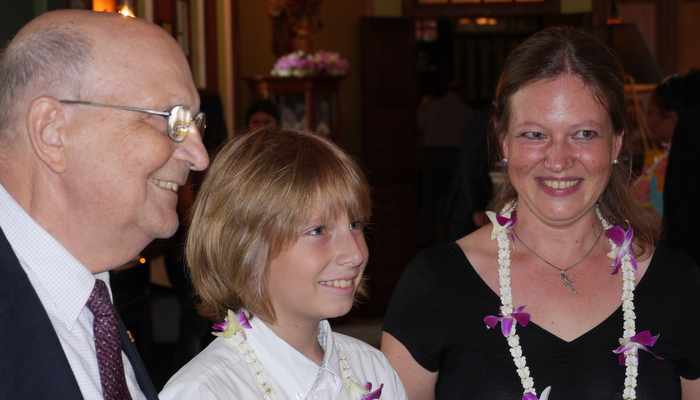 Amb Schulze commended Mr Naumann for his years of service, especially his work after the tsunami.

“Without your creativity, engagement, help and human feeling it would not have been possible to help so many persons here: Thais, foreigners or Germans,” Amb Schulze said.

“The German President has recognized what you did then, and has honored you with the Order of Merit from the Federal Republic of Germany, the highest merit the President can award to a German citizen, and I think you deserve it more than anyone else.

“You have really portrayed the best image of Germany in this part of Thailand and I would like to use this official opportunity to thank you in the name of the German President and the German Government for what you have done for us.”

After years of advice and assistance to German citizens, as well as tireless efforts to help create a better Phuket, Mr Naumann’s words were brief as he addressed the crowd of Honorary Consuls and friends, as well as German and Thai dignitaries.

“I sincerely thank all German residents in Southern Thailand who have supported me over the last 12 years. Without your support I would not have been able to have the power or the strength to attack grievances that are external and sometimes grievances that are internal,” Mr Naumann said.

“I think you will understand that to find suitable and highly qualified personalities for such a responsibility as consul for such a great country as German is not an easy task, but I think if you look at the CV of Anette you will agree with me that the President made an excellent choice,”Amb Schulze said.

With about 700,000 German tourists visiting Thailand every year, about 600 German companies operating in the Kingdom and about 30,000 German residents on Phuket alone, the Ambassador made it clear that Mrs Hoechstetter would have her work cut out for her.

“A consul is the ears and eyes of Germany. In Southern Thailand and Phuket, people will understand that you represent your country and you represent Germany in this part of the world. I think it is indeed a great honor to be nominated to this position and I would like to congratulate you in the name of the German President and in the name of the German Government,” Amb Schulze said.

Mrs Hoechstetter’s first official words were even briefer than her father’s.

“I am very very honored to be here tonight with all of you and to receive this position. I can only hope that I’m adequate to fill the huge footsteps my father has placed on Phuket and its community over the last 12 years,” she said.