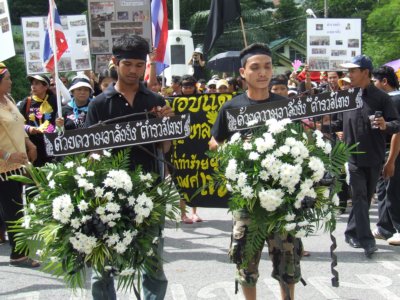 PHUKET CITY: Ceremonies on Monday morning marking National Police Day had some unexpected guests, when some 300 People’s Alliance for Democracy (PAD) protesters turned up to express their anger at the death of two PAD protesters who died from injuries sustained in clashes with police outside Parliament in Bangkok on October 7.

Despite the unexpected guests, the ceremony got underway as scheduled at 8:30 am, with Phuket Vice-Governor Worapoj Ratthasima reading a letter of address from Royal Thai Police chief Gen Patcharawat Wongsuwan.

“On the great occasion of National Police Day, all policemen must work with honesty and trust inspired by royal guidance from HM King Bhumibol Adulyadej, who said that one who works as a policeman must be truly intelligent, strong, patient and willing to make sacrifices. Then he can be proud doing an important duty with determination to work for peace and the advancement of the country.”

During the ceremony, about 300 PAD members paraded in front of the Phuket City Police Station, where they presented police with funeral wreaths to show their disapproval of the force used by police in Bangkok on October 7. A PGTV video of the demonstration can be seen here.

Many of the PAD protesters were teenagers from the Phuket branch of ‘Young PAD’.

Phuket PAD spokesman Natjarong Ekpermsup told the Gazette, “I hope that a new political system will reduce the power of the police. The police must have ethics. They must learn to look at Thais and detainees as people and as fellow human beings who share this planet.The police should remember that their salaries are paid by taxpayers”.

Mr Natjarong added that some 500 Phuket PAD members will attend the funeral of former police Lt Col Metee Chatmontree at a Bangkok temple today. Lt Col Metee was one of the two PAD protesters who died in the October 7 clash.

Many other Phuket PAD members attended the funeral, on Monday, of 28-year-old Angkhana Radappanyawut, the other PAD protester who was killed in the recent violence.