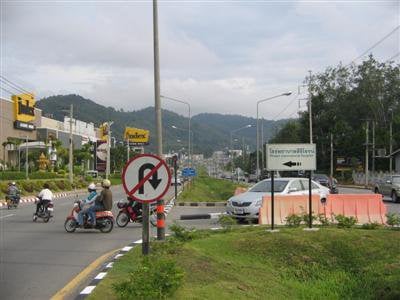 WICHIT: The U-turn on the bypass road in front of Phuket International Hospital (PIH) will remain open until a new set of traffic lights is completed further to the north, a provincial committee on traffic and road safety has decided.

In a letter published in a local Thai-language newspaper on October 13, Phuket Governor Niran Kalyanamit announced the committee’s decision, which overrules a previous order in early June that the U-turn be closed for safety reasons.

Since that time, however, some motorists took the matter into their own hands by pushing plastic barriers and concrete curbing out of the way, thus enabling them to continue making U-turns there.

Efforts by authorities to replace the barriers only resulted in them being moved again, at times out into the passing lane on the northbound side.

In his letter, the Governor said that the committee agreed on October 8 that the U-turn be allowed to remain open until a new set of stoplights is installed on the bypass road where it intersects Soi Bangyai, which runs behind Big C and connects the bypass road with Wichit Songkhraam Rd.

After the new stoplights are installed, U-turns will no longer be allowed in front of PIH, though southbound traffic will be allowed to cross over and turn into the hospital’s main entrance, Gov Niran wrote.

It is still not clear, however, when the stoplights will be installed.

Phuket City Police Traffic Inspector Teerawat Leamsuwan told the Gazette that all sides are waiting for approval of 900,000 baht in funding for the new project from Tambon Wichit under its budget for fiscal 2009.

Additional funding for the project will come from private sector sources including PIH, Central Festival Phuket, Big C and Tesco-Lotus.