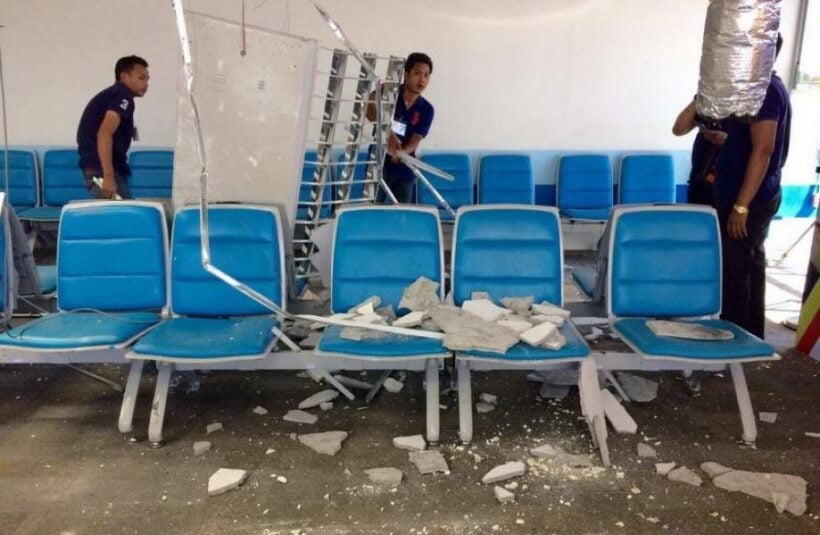 PHUKET: A 59-year-old Thai passenger was hospitalized with head injuries when part of the ceiling at Phuket International Airport’s domestic terminal crashed down on Saturday.

Bancha Sanguannam was travelling to Bangkok via NokAir. He was seated at Gate 81-82 while waiting for his flight when the incident occurred. Mr Bancha was taken to Thalang Hospital where he received nine stitches in his forehead.

“I heard a loud noise and then saw that the ceiling had collapsed. I did not notice the blood on my head until the other passengers pointed it out. Airport staff were very helpful and immediately came to my assistance,” said Mr Bancha.

“Initially, I was siting on the other side, but when I saw a Chinese family looking for a place to sit together, I moved to accommodate them. It’s lucky that no tourists were injured; otherwise, it could have negatively affected Phuket tourism,” he added.

Mr Bancha thanked AOT staff and said he understood that it was an accident.

Phuket International Airport Director Monrudee Gettuphan visited the victim at Bangkok Hospital Phuket where he was transferred for a brain scan after doctors at Thalang Hospital discovered a mark on his skull.

“We sincerely apologize for this unfortunate accident and accept full responsibility. The building is quite old – it was built in 1988 and last checked in 2002,” said Ms Monrudee.

Anoma Wongyai, director of the Tourism Authority of Thailand in Phuket and NokAir representatives also visited Mr Bancha at the hospital. He was offered a reimbursement for his original flight as well as a free ticket to travel when he chose.

Director Monrudee says that the area has been closed and that the ceiling will be fixed “as soon as possible”.