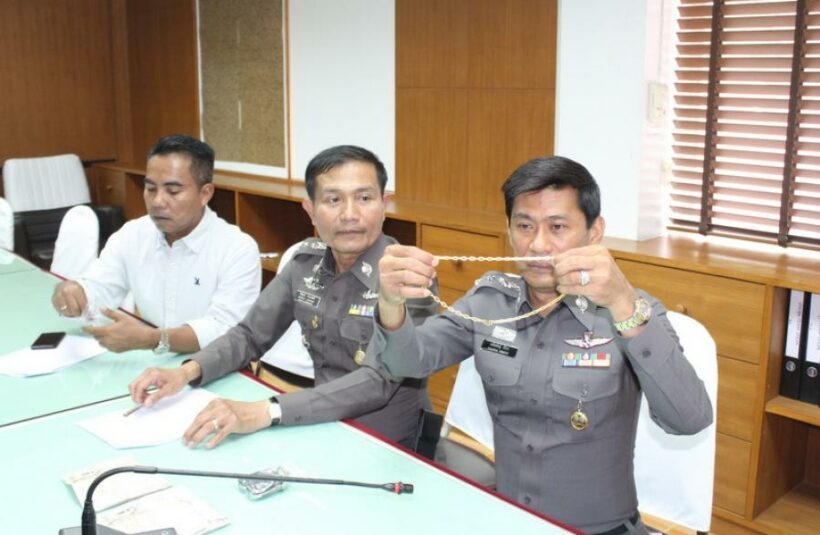 PHUKET: Four men and three women were arrested this weekend for allegedly selling 4 million baht worth of fake gold in several Phuket gold shops over the period of a month. Two suspects are still on the run.

Five of the suspects were nabbed at Tah Chat Chai checkpoint, one in Patong, and one in Koh Samui. The suspects are believed to have conducted more than 50 transactions in Patong, Phuket Town, Kamala and Chalong during this period.

One of the victims, Buathip Thanetnathasombat, 35, filed a complaint at Phuket City Police Station. She owns ‘Thongthip’ gold shop, which has three branches in Phuket Town and Patong.

“Ms Buathip said that until recently she hadn’t suspected that the gold was fake. She only became suspicious during the last interaction when she asked the suspect to provide identification and he refused. He then quickly left the shop,” said Col Peerayuth.

She looked back and checked all the gold that she had bought so far, only to discover that it was coated with gold on the outside but made of silver inside.

Ms Buathip said that between May 31 and June 3 alone, she had bought 170,000 baht worth of gold from various members of the gang.

Officers checked CCTV footage from the shop and the road to identify the suspect and learn his vehicle licence plate number.

“We tracked his movements and were able to capture him and four others at Tat Chat Chai checkpoint while they were trying to leave Phuket on Saturday at about 5:30pm,” said Col Peerayuth.

Another suspect, Pisit Sermthong, 42, was yesterday apprehended in Patong and a woman named Uraiwan Sa-Eibkong was arrested in Koh Samui.

“Mr Pisit actually walked into Phuket City Police Station himself to ask for a mobile phone charger. Coincidentally, one of the staff members from the gold shop was there at the time. He pointed him out to the police, who immediately arrested him,” said Col Peerayuth.

Police seized the pick-up truck along with 115,000 baht in cash, two gold necklaces, two gold rings and other items.

“They were taken in for questioning and soon confessed to charges of forgery. We have asked the court to issue arrest warrants for all of them, as well as the two others who are still on the run,” said Col Peerayuth.

Mr Suphab said he bought fake gold from Bangkok from a man he only knows as ‘Jo’ for 12,000 baht for a baht of gold (approx 15.16g). The others would then take the gold and sell it to shops in Phuket.

The men said they divided the money equally and received about 1,000 baht each per baht of gold.

“We will do our best to broaden the investigation and capture the rest of the suspects as soon as possible,” said Col Peerayuth.