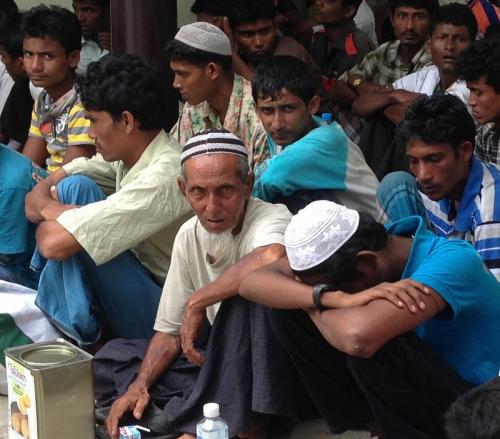 PHUKET: The arrival of more than 100 Rohingya men, women and children last weekend has left Phuket Immigration overflowing, with no respite on the horizon.

Of the 102 Rohingya taken into custody last weekend when the refugees sought shelter on Koh Lone after their boat engine seized, 35 men were transferred to Ranong Immigration (story here).

“The women and children are now at a shelter on Koh Sireh [on the east side of Phuket Town],” Capt Angkarn explained.

“We had to transfer some of them because Phuket Immigration was built to accommodate only 50 people,” Capt Ankarn said, noting that 67 Rohingya were still currently under detention.

And Ranong Immigration is also running out of room following the arrest of another group of 39 Rohingya by Takuapa Police at Tab Tawan beach in Phang Nga last Saturday.

“Police received a report from fishermen that they had spotted a ‘suspicious’ boat at sea. At first we saw only an empty boat moored at Tab Tawan beach in Ban Tab Tawan,” Takuapa Police Superintendent Khemarin Hatsiri said.

“Police looked around the area and found the refugees in a sea gypsy village,” Col Khemarin said.

“We arrested 37 men and two women who told us they left Rakhine state in a fishing boat on March 6. They intended to reach either Thailand or Malaysia to look for work.

“They said they were very exhausted and hungry from the journey. They survived on water and uncooked rice,” he explained.

“They looked pitiful, and some of them cried out loud when they saw us,” Col Khemarin added.

“We offered them food and water, then brought them all to Takuapa police station to be processed. We intended to transfer them to Phang Nga Immigration,” he said, “but Phang Nga Immigration has no room for them; they are already at maximum capacity with Rohingya arrested previously,” he explained.

“We do not have a place to detain them while they wait to be deported,” he stated.

“I would like to ask the government to resolve the problem of Rohingya as soon as possible,” Col Khemarin urged.

Phuket Immigration Superintendent Col Sunchai Chokkajaykij said he did not know how long he will have to keep the Koh Lone arrivals in custody.

“We are waiting for orders from our superiors in Bangkok,” he said.

“There are more than 1,000 Rohingya being detained across the country. We do not have room for all of them,” Col Sunchai added.

Meanwhile, Phuket Immigration is calling for donations of essentials for the new arrivals.

“We are requesting donations of food, toiletries and clothes for the Rohingya,” Capt Angkarn said.

“Especially useful would be donations of household medicines and skincare products. Many of them have suffered severe sunburn and dehydration from their journey in the open boat,” he added.

One dead, two thrown from car as workmen head to Phuket Airport