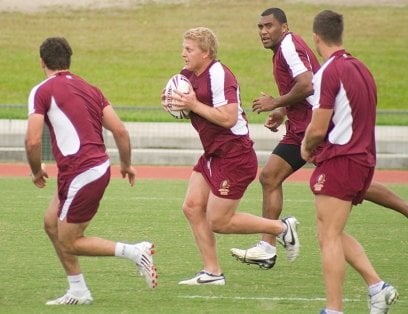 PHUKET: Two years without winning a Rugby League State of Origin game ended for New South Wales last night defeating Queensland to leave the 2011 series balanced with one win each.

A victory for the Maroons (Queensland) in yesterday’s match played in Sydney would have sealed the series and taken them to six titles in a row.

Hope for a break in the cycle came in the form of William Hopoate, a 19-year-old Manly star playing his first game for the Blues (New South Wales). Hopoate unfortunately ripped his hamstring during the match and will probably miss the deciding game in Brisbane.

Jonathan Thurston put the first points on the board for Queensland with a penalty inside two minutes and the Blues should have equalized in the 13th minute, but Jamie Soward’s 40 meter penalty rebounded off the upright.

Queensland extended their lead by another four points when Cameron Smith went over beside the posts in the 24th minute with Thurston converting to push the Maroons into an 8-0 lead.

New South Wales didn’t buckle and hit back within five minutes. Mitchell Pearce cleverly chipped over the Queensland line for Luke Lewis to claim and touchdown in the corner. Soward found his range and added a crucial two points for an 8-6 scoreline going into halftime.

Pearce was gain the provider for the Blues when he popped a pass over the top of Queensland’s defense for Hopoate to collect. The youngster somehow managed to twist his torso and acrobatically score right in the corner even with Billy Slater attempting to put his body between ball and line.

Soward’s kick was sure and with half an hour remaining New South Wales were in control at 12-8.

Anthony Minichiello was in superb form and justified his recall for the Blues on 77 minutes by crashing through the Maroons line to score after a Soward pass. Soward then converted to secure an 18-8 victory, the first Blues win after 12 losses in the past 15 encounters.

The deciding game will be held on Queensland’s home turf at the Suncorp Stadium on July 6.