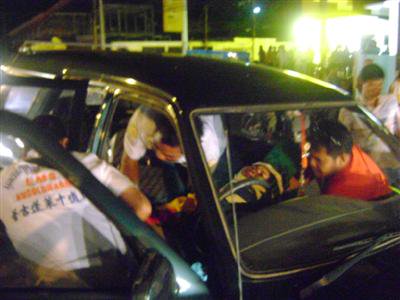 PHUKET: A fatal motorbike accident in Phuket last night was compounded when a car that slowed to survey the carnage was hit from behind and launched into a crowd of onlookers.

A pregnant woman was killed and four others were injured, one critically.

Thalang Police were notified at 6:45pm of an accident involving two motorbikes on Srisoonthorn Road (Route 4027), about 800 meters east of the Heroines Monument.

Dead at the scene was Sudjai Athaan, a 37-year-old rubber tapper and resident of Srisoonthorn Village 3. She was six-months pregnant. Phuket Kusoldharm Foundation workers transported her body to the Vachira Phuket Hospital morgue.

The second victim, an unidentified male, was rushed to Vachira Hospital for injuries described by rescue workers as “critical”.

After observing the wreckage, one rescue worker said Mrs Sudjai was probably driving against the traffic with a load of laundry when she hit the other vehicle head-on.

Neither person was wearing a safety helmet, the rescue worker said.

Just after police arrived at the scene and were beginning to question witnesses, a sedan heading toward the Heroines Monument slowed suddenly to survey the damage and to avoid hitting the large crowd that was gathering at the scene.

The sedan was hit from behind by an extended cab pickup driven by 44-year-old Amphrai Khaow-im.

The impact sent the sedan into a crowd of onlookers and motorbikes by the side of the road.

Phuket Kusoldharm Foundation workers transported both Aphiya and Issaphon, as well as Ms Amphrai, to Thalang Hospital for treatment of minor injuries.

The fatal accident last night follows the death of Phuket Technical College student Sathaporn Kidthook after the motorbike he was riding collided with a six-wheeled truck in Rassada during rush hour yesterday morning, and the deaths of mother-to-be Erna Dahlan and her seven-month-old unborn child when they were run over by a truck in Patong on Sunday.