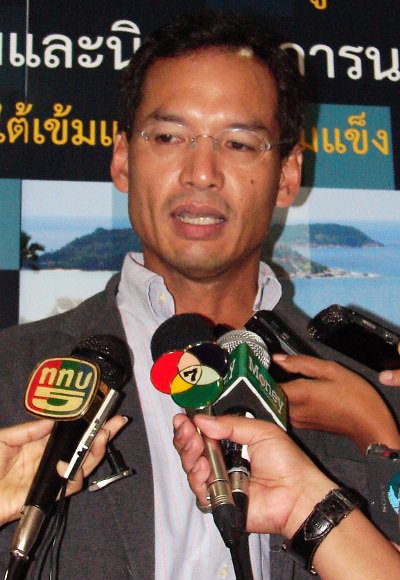 PHUKET: Finance Minister Korn Chatikavanij told a public hearing in Phuket yesterday that he can “guarantee” the project to build a convention and exhibition center will go ahead if his Democrat Party holds on to power in the upcoming elections.

Mr Korn was speaking at a public hearing at The Metropole hotel in Phuket Town to present three architectural plans for the Phuket International Convention and Exhibition Center (ICEC) from three different firms selected as candidates to design the structure.

The three designs presented at the hearing shared a common theme: Shelled creatures.

The first presentation was by KAED 103, which put forth a design in the form of a tortoiseshell. The second was by SPAN & FED, whose plans called for a “conch shell” design, while ASD presented a pearl oyster shape for the building.

One man in attendance, Watcharin Dumluck, warned that the design firms need to take more care in planning for security and safety systems for protection against natural disasters. He also said that he preferred more of a Thai or Sino-Portuguese design to what was presented at the meeting.

Phuket Tourism Association President Somboon Jirayut said he would like to see more parking spaces for buses and he didn’t want hotel rooms to be built at the center because there were about 60,000 rooms all across Phuket and about 7,000 rooms in Khao Lak already.

This number is enough to support visitors to the center, he said.

The hearing was called by Treasury Department Director General Winai Wittawatkaravet, who detailed the progress of the project.

The three architectural firms that presented their plans yesterday were chosen on February 22 this year, and one design will be selected before the end of this month, Mr Winai said.

After that, a search for a construction company would begin in July in hope of signing a contract for construction in September, he said.

Construction is expected to take about 900 days, he added.

“During this time we also need to figure out what is the best choice for transportation systems connecting the center with the airport and Phuket Town,” Finance Minister Korn added.

“It may be a monorail – whatever it is, if the center is finished and the airport is expanded with improved transportation [in Phuket], the standard of tourism will be raised in the Andaman region, creating long-term benefits for the economy,” he said.

Asked what would happen if the Democrat Party failed to secure a victory in the elections scheduled for June or July, Mr Korn said, “I don’t know the other parties’ policies, but next term if we are still in the Government, I guarantee the project will continue.

“If we’re not [in a leading role], I don’t think it will be canceled because everyone knows that Phuket has an important role as a leading tourism destination in the Andaman region – and the budget has already been approved, so there’s no good reason for a new government to cancel it,” he said.