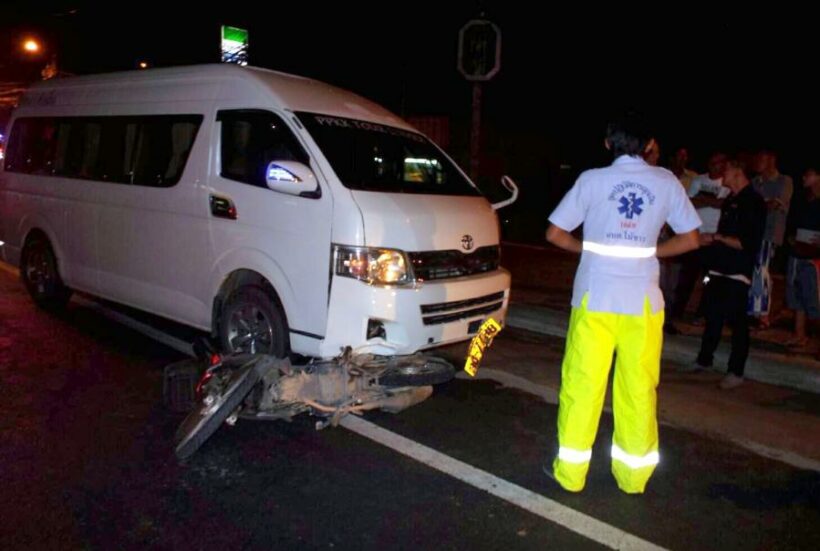 PHUKET: A man was killed last night after he crashed head-on into a minivan in Sakoo.

Lt Thanakarn Uchanarasamee of Sakoo Police and rescue workers received the report at about 8pm.

“Van driver Vitavat Jongsathichacorn, of PPKK Tour Service, told us that he was taking two Australian tourists to the airport while the motorcyclist, Panakorn Boonrong, was coming from the opposite direction and tried to overtake a white car in his own lane,” Lt Thanakarn told the Phuket Gazette.

Mr Vitavat told police that Mr Panakorn, 49, saw the van and attempted to quickly cut in front of the car, which he ended up hitting instead.

“Mr Vitavat said that the motorbike and its driver slid under the van and were dragged for about 30 meters before the van could come to a complete stop. The driver of the car was a foreigner, who drove straight to the police station after the crash,” he added.

Panya Kamman, owner of the tour company, told the Gazette that he was in discussions with his driver and expressed his condolences over Mr Panakorn’s death.

“It was truly an unfortunate accident and I feel terrible that it happened. Officers told me that they will view the CCTV footage from a nearby Family Mart store to confirm Mr Vitavat’s side of the story,” Mr Panya said.

Mr Panakorn died at the scene and his body was taken to Thalang hospital for examination.

Police have not yet disclosed the name of the foreigner at this point, who, along with Mr Vitavat, is under investigation by officers.

The tourists in the van were transferred to another vehicle to get to the airport.

Russian couple fined for sex in a Phuket tuk-tuk