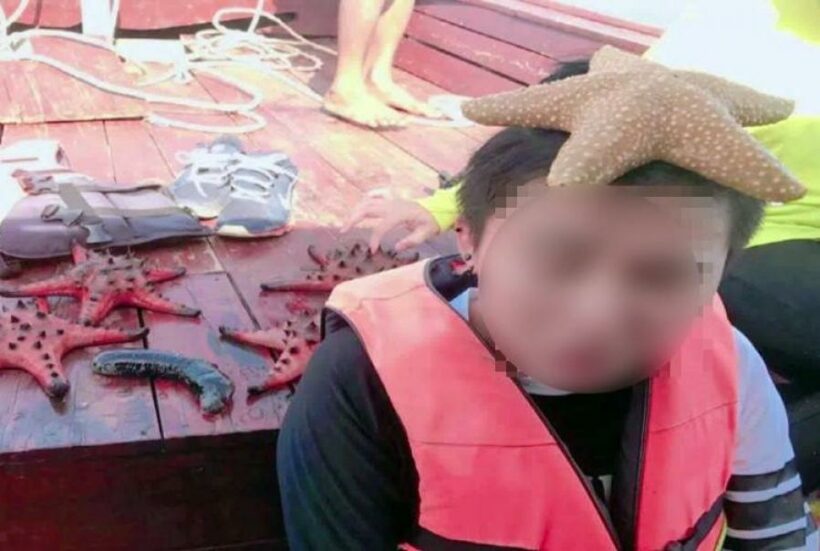 TRANG: A Thai tourist apologized yesterday on social media for taking selfies with a starfish at a national park in Trang province, while her tour guide was ordered to pay a fine.

Earlier on Thursday, the tourist’s selfies with a starfish went viral. She was widely condemned, as there is a ban on removing marine animals from from the sea. Netizens had called on authorities to take action against the tourist.

Later, the girl who uses the Facebook name Ohaee Nutcha, apologized for her actions and said that she was not aware of the rule.

She also explained on her post that the pictures were taken in Trang (sic) and that her guide had told her she could take a starfish from the sea to snap selfies.

A number of Facebook users have commented with disgust over the ruling, saying that it is unfair for local tourists to not be charged and heavily fined, since a number of foreign tourists have had to pay hefty fines for similar ‘crimes’ and even serve jail time. One Chinese tourist was detained two days without bail for capturing two fish, and had to pay 100,000 baht in fines (story here), while a Russian woman spent two nights in jail for feeding fish (story here).

Mr Wittaya said catching marine animals in the national park area is illegal. He urged every tourist to comply with the rule and preserve the marine resources for others as well.

Had Chao Mai National Park chief Manoj Wongsureerat revealed said that the tour guide who caught the starfish had been arrested and fined 500 baht (approx US$14.70).

“We have strict rules on tourism in the national park area, and this is a ‘rare’ case of a tour guide violating the rule and catching a marine animal to entertain tourists,” Mr Manoj said.

“The park will step up monitoring of tourism activities in the park to ensure no incidents like this ever happen again in future,” he added.

“Most of the tour boats in Trang are traditional fishing boats that local people use to serve tourists during the high season, so it is quite difficult to regulate them properly,” Mr Prachuap said.

“However, we are trying to educate the people to save our marine resources and promote sustainable tourism, because there are not enough officers to guard the big sea. We are sure that if the people realize the importance of marine life, they will preserve it dearly.”

Drug mule arrested in Phuket with 800,000 baht’s worth of pills