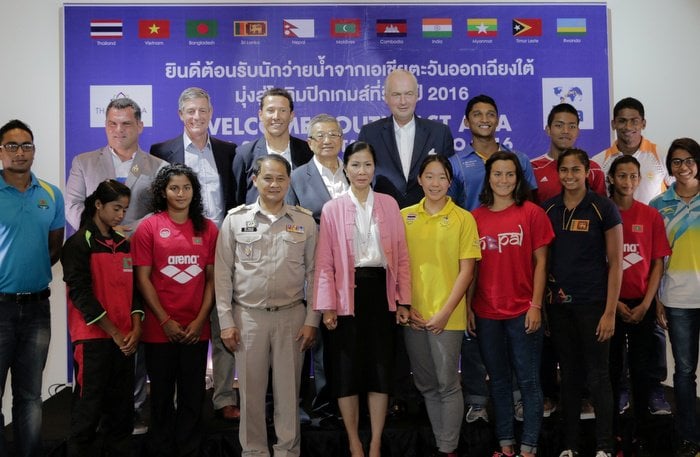 Thanyapura announced its official partnership with the aquatics international body FINA this week at a press conference attended by Tourism and Sports of Thailand Minister Kobkarn Wattanavrangkul and Phuket Governor Nisit Jansomwong.

Thanyapura and FINA have awarded 25 scholarships to swimmers from around the region, who will train and live at Thanyapura, while preparing for the 2015 FINA World Championships and the 2016 Rio Olympics – for which they have wild cards.

“We are proud to be the official venue for the FINA scholars training here in Phuket. The Ministry is in full support of the growth of Thanyapura, as Thailand strengthens its status as the ‘Sports Hub of Asia’,” Ms Kobkarn said.

“This initiative is part of a wider development strategy from FINA aimed at raising the level of aquatics worldwide and providing specific programs for athletes and officials on five continents. In 2014, the scholarships for swimmers were created and centers are already active in the USA, Portugal and now in Thailand,” said FINA Honorary Treasurer Pipat Paniangvait.

“Thailand is ready to receive and host some of the most promising swimmers in this region of the world and provide them with optimal conditions for training and preparation.”

A female and male swimmer from each nation will train at Thanyapura Phuket under the guidance of Thanyapura Head Swimming Coach Miguel Lopez.

“I am excited to have these 25 swimmers at Thanyapura. I have found a great pool of talent. The team momentum will make the swimmers better,” Mr Lopez said.

The swimmers will get both an education and a cultural experience in Thailand and also have the opportunity to join lessons, school functions, work with junior students and help coach swimming, in both physical education lessons and after school activities.