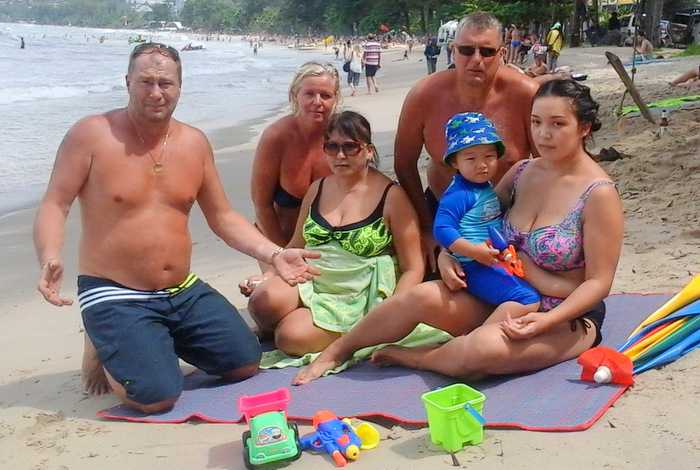 PHUKET: Officials are scrambling to get beach umbrellas and mats on the sands at the island’s key beaches this tourism high season before hordes of visitors arrive for the Christmas and New Year holidays.

The push comes as an island-wide ban on all umbrellas at Phuket’s beaches saw a Swedish family on holiday last week being told they were not allowed to bring their own umbrella to provide shade for their 18-month-old baby.

“We are trying to get beach umbrellas provided by local municipalities at all key tourist beaches. The high season has begun and we are trying to get this done as soon as possible,” Phuket Vice Governor Chamroen Tippayapongtada confirmed to the Phuket Gazette this week.

“The umbrellas will definitely be provided for free, but we are looking at having people who used to work as beach vendors provide mats for tourists to rent. There will be no more sun loungers. They will not be allowed back on the beach.”

Hundreds of vendors were forced out of work earlier this year by the beach cleanup campaign ordered by the National Council for Peace and Order (NCPO).

The campaign resulted in the revelation that vendors had sold their rights to operate businesses on the sands for amounts that totalled billions of baht (story here).

“We have held several meetings with vendors and officials from every beach in Phuket about getting umbrellas and mats back on the beaches. However, we cannot just give them permission to ‘own’ the beach like before,” said Vice Governor Chamroen.

“Local authorities have to find suitable places where vendors can rent out their mats. Every vendor must wear a uniform. They will be issued permits year by year, and they cannot pass the permit rights on to any third party.

“Each booth will be looked after by local government staff to make sure beach vendors do not break any regulations.”

Swedish tourist Thomas Tagheim brought his family to Phuket on holiday, but last week was refused permission to bring his own umbrella to provide shade for his infant grandson’s delicate skin.

As of Wednesday, the popular Accuweather website reported a UV Index of 8 (very high) for Patong Beach. The US Environmental Protection Agency defines a UV Index reading of 8 to 10 as “very high risk of harm from unprotected sun exposure.”

The key environmental agency advises: “Take extra precautions because unprotected skin and eyes will be damaged and can burn quickly… If outdoors, seek shade and wear protective clothing, a wide-brimmed hat, and UV-blocking sunglasses” (click here).

Regardless, the Tagheim family was forced to leave Patong Beach on November 5 – after days of ignoring warnings from local officials to remove their umbrella – after Tourist Police officers confirmed that it was not allowed.

“We bought our own umbrellas in Phuket Town because no umbrellas were provided at the beach,” Mr Tagheim told the Gazette.

“My daughter told him we needed shade for her child, who is one-and-a-half years old. The man did not care at all. He then went away and we stayed under our umbrella.”

On November 5, the official returned, this time accompanied by two police officers.

“After that we went to the Tourist Police office, and they told us that we cannot use our umbrella on the beach or at the tree line. We did not get any explanation as to why we had to remove our umbrella except that it was the new law from the government,” Mr Tagheim said.

“We have been coming here twice a year, in October and January, for seven years. If we cannot use our own umbrellas on the beach, we will not come back to the island – even though we love it so much. And I know that many of my friends and other tourists feel the same.

“What will Phuket be without family tourists? How can the government allow jet-skis on a public beach but not allow parents and grandparents to protect their children from overheating and sunburn?”

V/Gov Chamroen on Tuesday confirmed to the Gazette that he was aware of the incident.

“We would like to apologize for any inconvenience. We are working on this problem, but until we have found a solution I would like to ask all people not to bring their own umbrellas to the beach. It will only cause arguments and misunderstandings. We must uniformly enforce the laws for everyone,” he said.

“We are trying make as many people as happy as we can. We need to find a way for locals to earn a living, but we must make sure that no one occupies the beach like they have done in the past.”