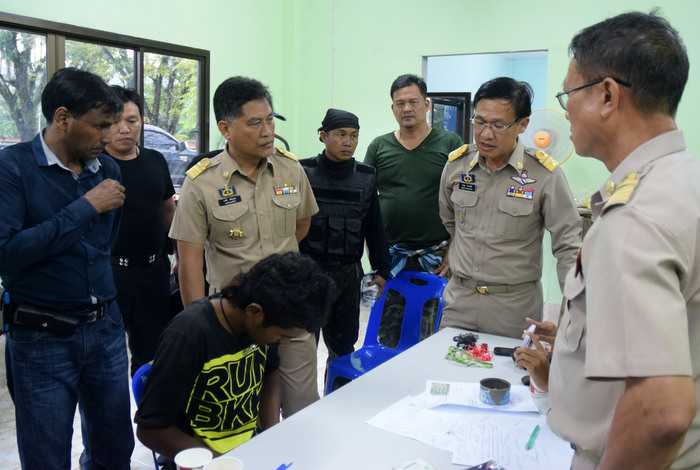 PHUKET: Officials north of Phuket are attempting to unravel a human trafficking network after the arrest of a Thai “caretaker”.

“It is clear that locals are part of this network. We will dismantle it,” vowed acting Phang Nga Governor Prayoon Rattanasenee today.

Songphol Klaimee, 20, also known as “Boss K”, confessed to police that he had been assigned the task of looking after the refugees when they were in the camp and hiding in the woods of Baan Bang Yai.

“A Thai man would call me and tell me to pick up food and water for the refugees,” said Mr Songphol.

Officers are attempting to determine the extent to which the human trafficking network has infiltrated the local community.

“We found some school milk containers in the camp, which makes it clear that locals must be involved in the process,” Governor Prayoon said.

“We will start questioning local government officers to determine how they could allow the refugees to stay in the area without reporting it to us.”

A series of raids in the last week has led to over 150 refugees being detained. Many are believed to have fled the UNHCR’s refugee camp near the Myanmar-Bangladesh border (stories here and here).

“All of them [from the first raid that detained more than 80 people] came from Bangladesh, where they found it too difficult to survive in the refugee camp, so they decided to come to Malaysia,” said Htoo Chit, executive director and founder of the Foundation for Education and Development (FED) (story here).

Earlier this year, the US State Department downgraded Thailand to the lowest level in its annual Trafficking in Persons (TIP) report – a move that could trigger sanctions by the United States.

After years of warnings, the US dumped Thailand, Malaysia and Venezuela at the bottom of a list of countries accused of failing to tackle modern-day slavery, AFP reported from Washington.

“We each have a responsibility to make this horrific and all-too-common crime a lot less common,” US Secretary of State John Kerry wrote in the 2014 TIP report, denouncing what he called “the evil of human trafficking”.

Tens of thousands of the world’s trafficking victims end up in Thailand as migrants from neighboring countries “who are forced, coerced, or defrauded into labor or exploited in the sex trade”, the report said.

“The downgrade to Tier 3 is affecting Thailand’s reputation. I urge everyone to act, and report any suspected human smuggling to us,” Gov Prayoon said today.

“We have to stop the smuggling of Rohingya – whoever is involved will face justice.”