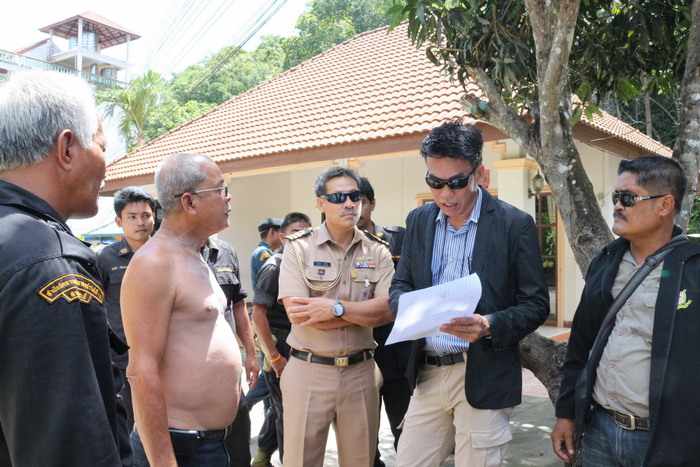 PHUKET: An investigation squad yesterday inspected developed areas allegedly encroaching on the protected forest area surrounding the Wang Kee Aon Waterfall in the hills of Patong, one of the places HM King Bhumibol Adulyadej visited on a trip to Phuket in 1959.

The team, composing Royal Forest Department (RFD) officers and Navy personnel, were following up on complaints from Patong residents that claimed that the area had been overrun by construction sites.

“The complaints said that many buildings had been constructed in this area, diminishing the natural landscape,” said Cheewapap Cheewatham, a former Sirinath National Park chief who now serves as director of the RFD’s Forest Protection and Fire Control Division (story here).

“We found that there are at least three construction sites near the waterfall. Additionally, PVC pipes have been installed upstream to divert water to nearby households, which diminishes the volume of water flowing to the waterfall.”

Although officers believed that the area looked like it had been encroached on, Mr Cheewapap said that they would have to wait for verification from the Land Department and aerial photo interpretation of the land boundaries to be completed.

“We can’t move forward until the land title documents for the buildings are checked and the boundaries determined. However, the waterfall is in a protected forest area, so if we can prove that the construction sites are encroaching, the buildings will be demolished,” said Mr Cheewapap.

It was also noted that an individual was claiming to own the land at the entrance of the waterfall. However, the individual’s name was not released to the press.

“It’s hard to get into the waterfall because someone owns the entrance. I have no idea whether they are allowed to own the land or not. I hope that the Land Department can get to the bottom of it,” said Wichan Sawasdirak, former Patong Subdistrict Chief (Kamnan).

Phuket man stabs relative over a bottle of whiskey