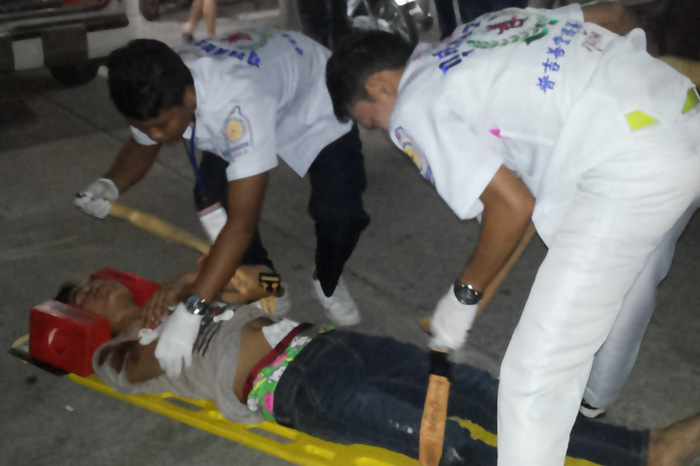 PHUKET: A 19-year-old man wanted for stabbing a relative late last night over 500 baht to buy a bottle of whiskey is expected to surrender to police tomorrow, the Phuket Gazette was told today.

When Thalang Police arrived at the house near the Heroines’ Monument about 30 minutes past midnight, the stabbing suspect had fled the scene. His relative, however, was still there, seriously injured.

“We saw residents gathered around Boonfak Kanlayapan, 24, who was on the ground trying to hold his intestines in,” said Lt Narongrit Malavejun of the Thalang Police.

“He is recovering well. He is conscious and able to speak, but his injuries are still serious. We are monitoring his condition,” a staffer at the hospital told the Gazette.

“Boonfak and I were sitting in front of our house when Kheow came by and asked for money to buy whiskey,” she said, adding that Kheow is a grandson of her current partner, who is not Boonfak’s father.

“I said no because Kheow had borrowed 500 baht before, but never paid it back.”

“I tried to stop them, but couldn’t,” said Ms Wan. “Then Kheow pulled out a knife and stabbed Boonfak and then ran away.”

Police have yet to determine what charges, if any, Mr Kheow will face, he added.

“We will figure that out after we hear his version of events,” Lt Narongrit said.