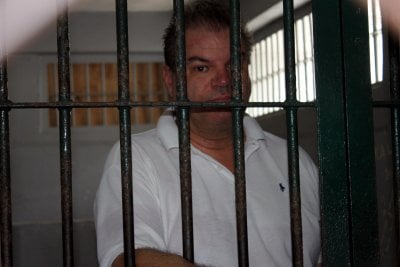 PHUKET: The Norwegian man arrested last night after the gruesome remains of a human body were found in his Phuket home has confessed to “accidentally killing” Rungnapa Suktong, his girlfriend of nine years.

“We had an argument. She pushed me and then I pushed her, and she fell down the stairs. I checked her pulse and she was not breathing… I didn’t know what to do. I was scared, so I hid her body,” he told police.

Mr Dokset was arrested at his house off Soi Koktanode in Kata last night when officers from Crime Suppression Division, Sub Division 5, in Bangkok, arrived in force along with Chalong Police and Phuket Provincial Police.

About 20 officers were involved in the raid, the Phuket Gazette was told.

The raid was coordinated after a tip-off from a Bangkok law firm who were working on a missing person report filed by Mrs Rungnapa’s family in Surat Thani two years ago.

She was last seen a month before her family reported her as missing, said Pol Col Atip Tannin, superintendent of Crime Suppression Division Subdivision 5, who led the raid on the house.

In the downstairs bathroom, which was locked, police found a plastic trash bin belonging to Karon Municipality.

Inside the bin police found pieces of flesh and a hip bone they believed were human. The flesh was so decayed that police could not learn any more from their gruesome discovery.

The officers immediately dispatched the remains to Surat Thani for examination last night.

The results, returned today, confirmed their fears: the flesh and bone were human.

The coroner in Surat Thani also reported that the decay of the remains had been accelerated by some form of acid.

The coroner is now conducting DNA tests to confirm whether or not the remains are those of Mrs Rungnapa, police said.

Police also found in the bathroom a woman’s purse, one 9mm pistol and 58 bullets.

A check of the registered owner of the gun confirmed that it belonged to Mrs Rungnapa.

Police officers then scoured the house for more clues, including a pump room. Believing that more remains might have been hidden in the septic tank, police ordered the tank to be emptied.

A search of the tank’s contents, however, revealed nothing other than the obvious.

Parichat Sriraksa, a 30-year-old cousin of Mrs Rungnapa, told the Gazette that Mrs Rungnapa worked as a maid in Patong.

“She was Mr Dokset’s girlfriend for seven years. They lived together in his house for six years,” she said.

Mrs Rungnapa left Mr Dokset and started a relationship with a new boyfriend, a police officer in Patong. The policeman – who police have yet to name – and Mrs Rungnapa married and had one son, but Mrs Rungnapa sent her son to stay with her family in Surat Thani, Miss Parichat explained.

Mrs Rungnapa, who on marriage stopped using her maiden name Ratsombat and assumed her policeman husband’s family name Suktong, was reported missing one month after she left Mr Dokset, which was more than two years ago, said Miss Parichat.

“Rungnapa had two other sons, 12 and 14 years old, both of whom are from her marriage before she met Mr Dokset or the policeman,” she said.

Those sons and more than 10 relatives from Surat Thani were at the house today.

“We had reported Rungnapa as missing to the Patong Police before,” Miss Parichat said.

“We always suspected that she was murdered. We saw blood stains in her car when the bank came to repossess it after no payments were made since she went missing,” she added.

“Patong police promised to take care of the case, but they didn’t really take any action. So we decided to ask for help from the media and everyone else we could possibly get. Finally we got the Crime Suppression Division to help find my cousin,” Miss Parichat said.

Mr Dokset initially denied the charges against him.

Up until his confession this afternoon, Mr Dokset was being held on charges of hiding the body and possession of a firearm, Chalong Police confirmed.

He said he knew nothing about the body parts in his house, Chalong Police told the Gazette this morning.

Mr Dokset also debunked reports that he was a doctor. He told police that he went to a medical school for two years, but did not graduate.

During his time in Phuket, Mr Dokset rented out his own properties for income.

Police are continuing their investigation to gather more evidence in the case.