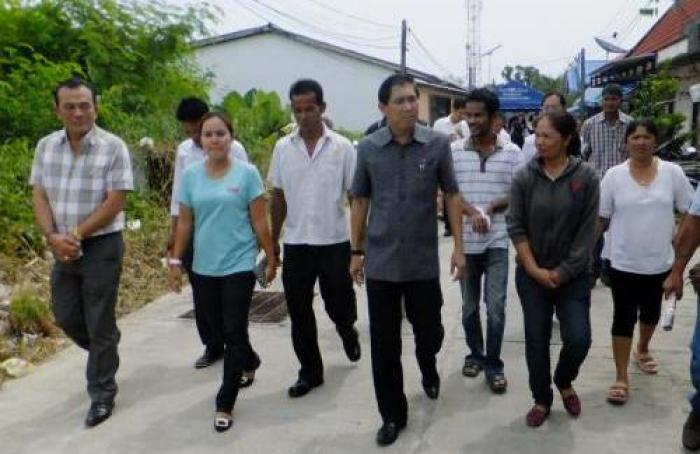 PHUKET: The Community Chanote plan that would guarantee 18 impoverished communities on Phuket the right to live where they have been squatting for generations has stalled out.

“As of today, there is no further information about the plan,” said Vice Governor Prajiad Aksornthammakul. “Unfortunately, there is nothing we can do until we get word from Bangkok.”

In 2013, then-Phuket Governor Maitri Inthusut led a team to one such village to hear their top concern: they have been waiting for years to be issued a Community Chanote land document.

“Eighteen communities [in Phuket] have requested a Community Chanote,” Governor Maitri explained to the villagers at the time. “So far, three communities – Klong Koh Pee, as well as the Tah Sak and Ao Yon communities in Pa Khlok – have passed the fourth and final step in the process.”

However, the applications are now in the hands of the Ministry of Natural Resources and Environment in Bangkok. The officials there must vet the applications and present them to Cabinet for final approval (story here).

Neither Vice Governor Prajiad nor Phuket Governor Chamroen Tipayapongtada know where in the final stages of approval the plan came to a silent halt.

“There is a lot of focus on Phuket becoming a world-class destination. However, we must not forget about local people who still need our help,” Governor Chamroen told the Phuket Gazette. “There are, in fact, 20 communities on the island that don’t even have electricity or portable water. I have sent officers out to check on these communities, even if there is nothing we can do about the Community Chanote situation at the moment.”

The Community Chanote scheme, created under the former Democratic government of Abhisit Vejjajiva, is designed to allow communities to live on government land and use it for agriculture, but does not allow the land to be sold. However, the Yingluck Shinawatra administration did not move forward with the plan, reportedly out of fear that it could lead to more encroachment on state land.

Additionally, there have been no reports of the National Council of Peace and Order having picked up the ball, after it was dropped by former Prime Minister Yingluck.

Among the chief concerns, cited by an Internal Security Operations Command (ISOC) panel investigating the scheme, was the fear that Community Chanotes would somehow be sold to private investors, a recurring problem with the similar SorPorKor land use documents, which specifically allow people with low incomes to occupy and farm – but not own – state land. Community Chanote titles, however, are different from SorPorKor land use documents because they are issued to villagers as communal land that no particular individual can own.