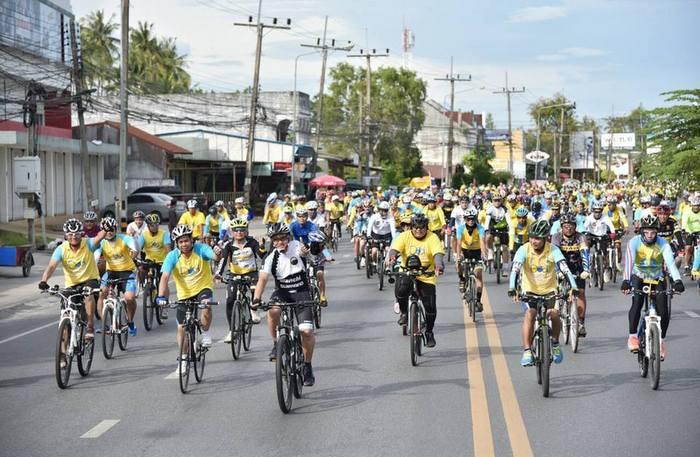 PHUKET: People throughout the nation will be marking the auspicious occasion of HM King Bhumibol Adulyadej’s 88th birthday with a mass cycling event entitled ‘Bike for Dad’ on Friday, December 11.

The event is being held in accordance with HRH Crown Prince Maha Vajiralongkorn’s wish to express his gratitude and loyalty to HM The King on this special occasion, said Prime Minister Gen Prayut Chan-o-cha.

“In Phuket, the 29-kilometer Bike for Dad route will start at Phuket Provincial Hall, journey through Phuket Town to Chalong via Chao Fa East Road, around Chalong Circle and back up to Saphan Hin via Chao Fa West Road,” said Phuket Governor Chamroen Tipayapongtada. “I will be leading the convoy of bicycles, along with many other local officials, starting at 3pm.”

Motorists are urged to use alternate routes during the bike procession, as roads will be blocked off.

The cycling event aims to promote a healthy lifestyle throughout the island as well as provide a day of fun and games for non-cyclists.

The inaugural event has already garnered 5,355 registrants, with more expected to sign up before race day.

All participants are urged to wear the yellow Bike for Dad shirt to honor HM The King.

No sign of Community Chanotes for impoverished Phuket villages