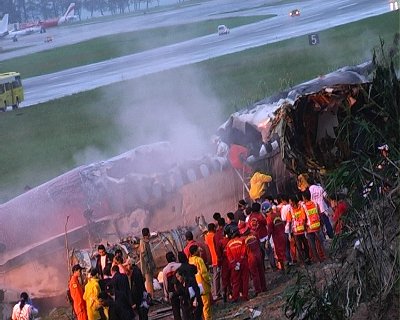 PHUKET: There will be no official memorial service this Sunday, September 16, to remember the 89 people who died in the crash landing of One-Two-Go Flight OG269 five years ago.

“It is not a day to remember. It was a tragedy and we do not want to perpetuate horrible memories of the incident,” Phuket Airport Director Prathuang Sornkham told the Phuket Gazette.

When asked what respects people visiting the airport to commemorate the event would be permitted to perform, he replied, “We have no policy. We have received no requests from people saying they want to pay their respects to those who died in the crash.”

Mr Prathuang explained that Phuket Airport has improved some safety procedures since the accident five years ago.

“Since the incident, our air traffic controllers are in more frequent contact with pilots of approaching aircraft and we have improved our system of landing lights and other navigational aids,” he said.

Orient Thai, the parent company that operates One-Two-Go, and its CEO Udom Tantiprasongchai have never faced any remedial action as a result of the crash despite an inquiry by Thai officials.

A British Coroner’s inquest into the crash reported a “deficient approach to air safety” and that “insufficient training and overworked pilots are distinctive features of the accident investigation report.”

“Cumulatively, these failures permeated through into the flying abilities of the pilots of flight 0G269 on that day with disastrous and tragic consequences,” the coroner said.