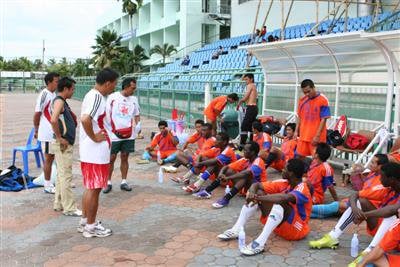 The home side has added 15 new players to its squad since its last fixture and coach Somsak Waijarean is determined to make amends for their dismal start to the season. Only two players remain from the original squad, the goalkeeper and the captain.

“I joined the team after their first league match in Division Two. The old coach quit following the 4-1 defeat at home to Satun. We played three more games at home and we lost all of them. We’re in seventh position and only have four points. During the break I have brought in 15 new players, because the old team wasn’t very good,” Mr Somsak said.

In the upcoming fixture, the Sea Dragons will face Narathiwat who recorded a 2-0 win over Somsak’s men in their last outing before the season break.

“We have a great chance to win because we have changed the majority of the team and we’ve been training very hard. We also had a coach come down from Bangkok to help train the players and improve their fitness levels,” he said.

Phuket FC are currently second from bottom in their division and have failed to register a single point at home.

Despite their disappointing position, Mr Somsak believes his side still has a lot to play for.

“We still have seven matches left, three here in Phuket and four away from home. At the very least we must pick up nine points from our home games,” he said.

The Phuket vs Narathiwat game will take place at Surakul Stadium on July 5, with kick off at 7pm.

In the first half the price of admission was 50 baht for adults, with children allowed in free.

Fans are also allowed to bring their own refreshments into the stadium, much of which is protected from the elements by a roof.