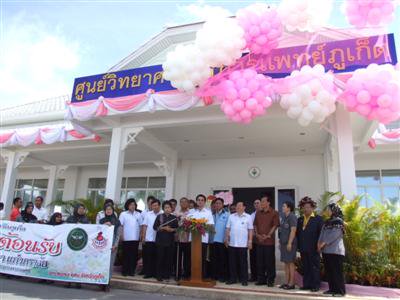 The move is part of a five-year plan to double the revenue of the medical service industry to 400 billion baht by 2014 and to further establish Thailand as a medical hub and world-class spa destination.

These and supporting infrastructure will allow Phuket to become a medical knowledge center in the near future, he said.

The center is dedicated to preventing the spread of Legionnaires’ disease, chikungunya, food poisoning and a host of other preventable medical conditions.

Mr Witthaya said Phuket is an important tourist destination in Thailand, generating an income of more than 72.5 billion baht each year.

Total revenue from Thai spa and massage should account for 80 billion baht of the total target of 400 billion baht in 2014, he said.

So far, there are 200 spa operators in Phuket but only 70 have been licensed by the ministry. However, the association plans to increase the number of certified spas to 100 by the end of the five-year plan.

In addition, the association will promote more hotel spas. At present only 50 of Phuket’s 400 hotels offer spa services.

The success of the plan will reduce risks to the spa industry, which is currently highly reliant on tourism, Mr Wichien said.

Dr Kulwadee Kulsrisombat of the Promjai Dental Clinic, which operates two branches in Phuket, said 90% of the walk-in patients in her clinic are foreigners who enjoy receiving international-standard treatment at costs lower than in their own countries.